Which East is Red? 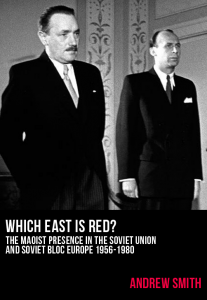 There is no doubt that the 1956 20th Congress of the Communist Party of the Soviet Union (CPSU) and the “secret speech” of Nikita Khrushchev attacking Stalin was a total disaster for the socialist camp and international communist movement. Khrushchev's speech was the first step on the road to the dissolution of the USSR in 1991. Many communist parties never recovered from the damage done. Internationally a split arose in the international communist movement as the USSR attempted to impose and force the dangerous revisionist line on other parties, notably the Chinese and Albanian parties. In many countries ‘anti-revisionist’ parties were formed and by the mid-1960s there was an open split. A few parties did not take sides or argued for unity, most notably the Workers’ Party of Korea (WPK), which condemned both modern revisionism (ie the CPSU) and Left opportunism (China and Albania).
In those countries dominated by the USSR, there was a cosying up to the USA, the floodgates of imperialist ideological and cultural infiltration were opened, and internally there were reforms (the economic reforms usually resulted in prices going up) and a gradual dismantlement of the socialist system. When the Soviet bloc collapsed in the period of 1989–1991 people not only asked why but also raised the question of why didn’t anyone oppose what was going on?
This booklet goes part of the way to answering that question.
Smith is not a communist but a liberal and academic, and many of his views need to be taken with a ton of salt. Nevertheless, it is goldmine of information on resistance to revisionism from within the Soviet Union and the East European socialist countries, although an initial criticism is that the book could be longer with more depth.
It also misses out, because of its narrow framework, the non-Maoist communist movements in Czechoslovakia, Romania and Yugoslavia that were opposed to the 20th Congress on traditional ‘Stalinist’ lines.
Smith details how in the Georgian SSR of the USSR in March 1956 there were huge pro-Stalin demonstrations of up to 70,000 people that ended in riots which were put down by the security forces with loss of life. Later on, rank-and-file members of the CPSU raised awkward questions about the direction of the CPSU, such as “Are we not in fact compromising with imperialism over West Berlin?” and questioned that generous aid was being given to non-socialist countries such as India whilst denying aid to socialist countries such as the People's Republic of China.
A number of anti-revisionist groupings were formed within the USSR. Most were small but one, the Workers Centre, was able to organise strikes.
The book contains short accounts of anti-revisionist movements in other socialist countries such as the German Democratic Republic (GDR), Hungary, Bulgaria and Poland, and has a piece on Albania, the only ‘anti-revisionist’ European socialist country. The best sections, however, are on Bulgaria and Poland.
The piece on the little-known Bulgarian abortive coup in 1965 is a real nugget. The ‘hard-line’ Bulgarian leader Vâlko Chervenkov (brother-in-law of Georgi Dimitrov) had been forced out of power by Khrushchev in 1956 and later suspended from membership of the Bulgarian party. Todor Zhikov, who replaced Chervenkov, was not only seen as a revisionist but also a puppet of the USSR by more independent-minded Bulgarian communists. In 1965 a group of generals and some party leaders staged a coup to try to remove Zhikov but it failed.
In Poland, Kazimierz Mijal, who are been a communist partisan leader in the Second World War and a minister in the People's Republic of Poland, formed an anti-revisionist Communist Party of Poland in 1965. He went into exile in Albania, then China, and on return to Poland in 1984 was arrested by the revisionist regime. Mijal’s Communist Party combined anti-revisionism with militant anti-Zionism and Polish nationalism, which leads to Smith to criticism the party for anti-Semitism.
The section on Albania is fairly short. It does not really explain how Albania and China fell out so badly, with Hoxha even going as far as to say that China, which he previously praised to the skies, was not only revisionist but had never been a socialist country in the first place.
Apart from its short length the book has a number of weaknesses and inaccuracies. Firstly, the author seems totally unaware that there is evidence that GDR leader Walter Ulbricht was actually opposed to Khrushchev's denunciation of Stalin but could not do anything because of the GDR's dependency on the USSR. Some German communists say Ulbricht was the best leader of the GDR and that Honecker was the revisionist. There is a serious howler in which Smith says the Korean Armistice Agreement in 1953 was signed between “North and South Korea”. In fact the treaty was signed between the USA on one side and the Democratic People’s Republic of Korea (DPRK) and China on the other, south Korea was never a signatory. Smith also claims that the Vietnamese and Korean parties “vacillated” between China and the USSR, which is inaccurate. The Workers’ Party of Korea took an independent position.
Nevertheless, this short and easy to read book throws an interesting light on a fascinating subject. You cannot help thinking that if only revisionism had been smashed into the ground, the USSR and other socialist countries would be still here today.

The book can be ordered online from the publishers or downloaded for free from the American Georgia State University (GSU) website.

Posted by london communists at 6:47 AM