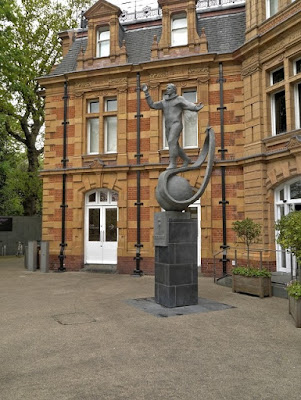 On 12th April 1961 Soviet cosmonaut Yuri Gagarin became the first man in space. He soon became an icon for the Soviet Union in a tour of the world that included over 30 countries. This was during the height of the Cold War and the American president, JF Kennedy, predictably barred Gagarin from visiting the USA. The British Conservative government, however, took a more mature approach to the Soviet cosmonaut, who received a rapturous reception from the crowds in London and Manchester in a tour that ended with a meeting with the Prime Minister, Harold Macmillan, and tea with the Queen at Buckingham Palace.
Sadly this foundry-worker turned spaceman died whilst on a routine training flight in 1968 – but his memory lives on in the former Soviet Union and throughout the global aerospace community.
Gagarin’s ashes are now buried by the Kremlin Wall but you don’t have to go to Moscow to pay your respects to the legendary cosmonaut. His statue stands outside the Royal Observatory in Greenwich, depicting Gagarin in his spacesuit astride the world.
It is, in fact, a copy of a monument that stands in Lyubertsy, the town where Gagarin worked as a foundry-man before joining the Soviet Air Force. The London statue was given to the British people in 2011 by Roscosmos, the Russian Space Agency. Originally displayed in the Mall, it was subsequently moved in 2013 to its permanent home at the Royal Observatory in Greenwich Park in south-east London, in grounds renamed Gagarin Terrace.

Greenwich Park is open from 6am for pedestrians and 7am for traffic all year round. Admission is free.

Posted by london communists at 4:46 AM