Two of a kind? 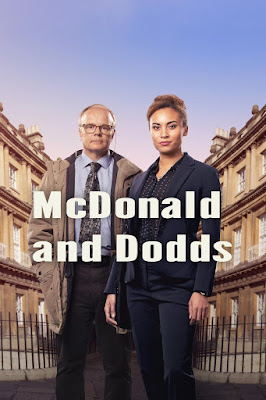 At face value a typical Sunday night detective drama to finish off the weekend however, it touches on the issues of class and race that may interest readers.
Set in the quaint historic, and in my opinion over-rated, city of Bath; the drama revolves around two seemingly mismatched detectives whose differences complement each other.
DS Dodds, played by Jason Watkins, is a 50-something slightly anorakish figure, with a poor understanding of modern technology, moved to operational policing by his superiors in the hope he will take early retirement. DI McDonald, played by Tala Gouveia, is a more dynamic and ambitious figure on secondment from the Met. Where Dodds takes a softly softly approach and in the initial episode solves a crime through methodical research, McDonald is a police officer in a hurry, keen on promotion and making a name for herself.
In episode one a multimillionaire villain, played by Robert Linsay, tries to persuade Dodds that they are two of a kind; after all, they are both middle-aged men who should stick together against those different from them. There is a racial element because McDonald is mixed race. When I watched this scene my initial thought was, that these two men have nothing in common. How can a man like Dodds, who probably lives in a semi-detected house and drives a Ford Focus, have anything in common with a man who lives in a mansion and spends thousands of pounds on a suit?
The myth that white men, particularly those of a certain age, are under threat is a myth put forward by the far-right. It is the ethos behind reactionary movements such as the Football Lads Alliance, which was praised by the by the Spectator magazine. The editor of the Spectator is often seen on the terraces of his local football ground. This ridiculous myth is mirrored by an extreme section of the fake-left who automatically view white males as the enemy. To these malcontents the worst possible thing to be is white, male, middle-aged, pro-Brexit and of course a Stalinist, whereas supporting the European Union (EU), Israel and imperialism in general aren’t a problem. In the real world however, the most powerful individuals in the world are middle-aged men, in most cases of a certain class – the rich.  What both groups of charlatans ignore is class.
McDonald meanwhile, mentions attending a course in London run by the security services where she discusses tactics used to undermine your enemy: disinformation, fake news and confusion. We might ask ourselves about the role played by the far-right and fake-left in undermining real opposition.
Back to the television series, Dodds is very much the hero. He does not allow his poor dress sense stop him from picking out crucial leads that result in crimes being solved. The politically astute McDonald is able to use his skills to her own advantage, at the same time protecting Dodds from superiors who want to pension him off. Together they make the perfect duo.
Posted by london communists at 8:42 AM