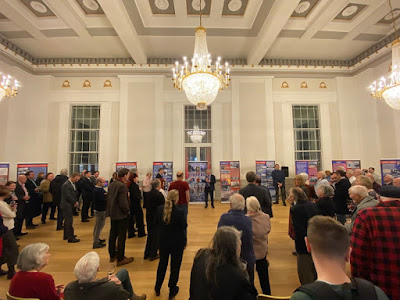 The defeat of the Nazi legions at Stalingrad in February 1943 marked the beginning of the Soviet offensive that ended with Hitler dead in his bunker and the Red Flag flying over Berlin in 1945. The turning point in the Second World War was an immense boost to morale to the anti-fascist resistance throughout occupied Europe and to the people on the British “home front” who had suffered the wrath of the Luftwaffe and faced continuing U-boat blockade. Now almost past living memory, the memory of those distant days has been recalled this week in a St Albans’ exhibition that looks at the Soviet victory and its impact on the cathedral city and the nearby Hertfordshire villages.
Timed to commemorate the 75th Anniversary of the end of  the Second World War  the events, which include an exhibition, lecture, a radio bridge and cinema screening are being supported by the charitable Foundation “Stalingrad Battle”, based in Volgograd (the former Stalingrad) and London branch of Rossotrudnichestvo, the Russian culture centre.
The epic Russian feature film Stalingrad (2013) was shown at the Odyssey cinema while Radio Verulam, the local radio station, set up a radio bridge with Volgograd FM throughout the week.
But the highlight of the week’s events was the “Stalingrad in British History, 1941-1945” exhibition at the New St Albans Museum in the Town Hall.
Graham Kentsley, a businessman who grew up in St Albans, helped launch the exhibition. The founder of the RedSquare International group that trades mainly in Russia and the former Soviet Union told the media: “The Battle of Stalingrad was the largest confrontation of World War II in which Germany and its Axis allies fought the Soviet Union for control of Southern Russia. The scale of the Battle of Stalingrad is staggering with a cost of over a million Red Army and civilian casualties. It’s fair to say that the hard-fought Russian victory was also a turning point of the war”.
“What’s never been commemorated is the role the ordinary people of Great Britain played by contributing essential supplies to the people of Stalingrad during their long and desperate siege. In particular, residents of the towns and villages surrounding St Albans were known to have given generously. It’s been a long held ambition of mine to tell that story,” Kentsley said.
Dr Dmitry Belov, President of the Battle of Stalingrad Foundation, who gave a talk at the Assembly Rooms about the battle said: “It is important to remember that Russia and Great Britain were vital allies in World War II and this story of the Battle of Stalingrad highlights a special bond between the ordinary people of our two countries”.

Posted by london communists at 6:27 AM