Getting to grips with the crisis 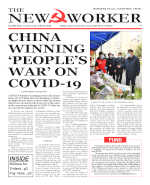 The news that the Health Minister has gone down with coronavirus is a sign that the virus has now reached out to the corridors of power in Westminster. By Tuesday the number of cases in the UK reached 382, a rise of 63 from the previous day, with a sixth person confirmed to have died after contracting the virus also known as COVID-19.
Whether this will inject a new sense of urgency into the Johnson government remains to be seen. Last week’s bumbling press conference in which Boris Johnson told us how to wash our hands followed by more confused ramblings on ITV’s This Morning show have not inspired confidence amongst the elderly and the infirm, who are most at risk from the COVID-19 virus.
The Government’s response to the crisis was unveiled in the Budget this week. But abolishing business rates for small firms in England, extending sick pay and increased NHS funding only goes part of the way to tackling the escalating threat of a devastating epidemic that could overwhelm the health service and seriously undermine the economy at the same time.
Labour Shadow Chancellor John McDonnell says that 10 years of “cuts, weak growth and widespread insecure work” have left the UK in a “vulnerable position” to a shock such as the one the country now faces. Government spending is “nowhere near the scale we need” he says and after “10 years of austerity… we’ve got inequality and poverty that we’ve not seen on a scale in this country”.
Labour points out that NHS trusts ended the last financial year with a combined deficit of £827 million, excluding £256 million of exceptional technical adjustments due to the collapse of Carillion, whilst clinical commissioning groups had a debt of £150 million. Trusts are now increasingly relying on loans from the Department of Health, which they are unlikely ever to repay.
Labour has highlighted the dismal state of our hospitals today. Since 2010, 17,000 NHS beds have been cut and one in 12 health service posts in England is unfilled. Some 214,000 people, one in four patients, left waiting on trolleys for over four hours last year – the second worst performance on record  – and over 11 per cent of ambulances left waiting over 30 minutes to deliver patients to hospital. More than 5,000 hospital patients spent over 12 hours in A&E over the acute Christmas period last December; 678 urgent operations were cancelled between January and February last year, and 4.3 million people are now on waiting lists awaiting treatment.
Communists believe that the National Health Service is a cornerstone to our society, to treat all, when needed, paid through a fair taxation system, to give good after-care, to prevent the spread of disease, and encourage and promote a healthy lifestyle. A good NHS is essential for a healthy population, and essential to a socialist society and socialist economy.
Short-term measures, ‘hardship funds’ and tax breaks for small shops are not going to keep coronavirus at bay. We need to follow the Chinese example that the Italians are now following, to stop the virus in its tracks. The NHS needs massive injections of funds to fill the vacancies at all levels and recruit the health workers needed to deal with the current crisis.
John McDonnell says the coronavirus threat has “exposed the social emergency” Britain faces and said that “someone needs to get a grip”. Sadly, but not surprisingly, there’s no “someone” who fits the bill in the current government.
Posted by london communists at 5:18 AM