Crawling to the Americans 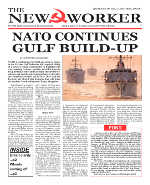 Licking the boots of the Americans comes as second nature to those sections of the ruling class who believe that their global interests are best serve through the might of US imperialism.
They call it the “special relationship”. They no longer talk about the “English speaking peoples”. It’s the “Anglosphere” these days. But they still claim that the political and cultural ties that supposedly bind the Britain and the USA have created a common destiny to lead what some of them still call the “free world”.
Although grovelling to US presidents has been reduced to a fine art by Tory politicians, it is not the exclusive preserve of the Conservative & Unionist Party. Labour’s Tony Blair liked basking in the reflected glory of the Stars and Stripes when he strutted across the globe posing as US imperialism’s chief henchman during the Bush era.
Boris Johnson is now going along the same road. Last week we went along with Franco-German moves to undermine the nuclear deal with Iran to justify support for the US economic blockade of Iran and any future US attacks on the Islamic Republic.
He tells the Russians that relations will not return to normal until the Kremlin stops the alleged “destabilising activity that threatens the UK and our allies and undermines the safety of our citizens and our collective security".
And this week Johnson welcomed the US lackey, Juan Guaidó, who calls himself the “interim president” of Venezuela despite the failure of repeated attempts to overthrow the legitimate left government of Nicolas Maduro.
Johnson won the election promising to get Brexit done and dusted. But all he wants to do is replace the Treaty of Rome with a ‘Treaty of Washington’ that will open up British markets to US vulture capitalism for little in return apart from cheap food that we could get from a ‘No-deal’ Brexit from any country in the world.
Brexit is a golden opportunity for Britain to expand its trade all over the world. A UK–China Free Trade Agreement would clearly be of great benefit to both sides, along with similar agreements with India, Russia and our old Commonwealth trading partners. But Johnson clearly can’t see beyond a one-sided trade agreement with the USA.

The Words of Trump

Whilst glaciers melt and massive bush-fires sweep across Australia, Donald Trump is still in denial over climate change. The US president was on top form this week telling fellow world leaders at Davos that: “We must reject the perennial prophets of doom and their predictions of the apocalypse. They are the heirs of yesterday's foolish fortune-tellers."
The 50th annual meeting of the World Economic Forum (WEF) at the Swiss resort of Davos focused on green and environmental issues, and called on attending companies to move their business models towards greener choices.
But this was ignored by Trump, whose clique sees their demands as threats to the big US energy corporations responsible for much of the pollution in the USA today.
Catastrophic climate change is not inevitable. The technologies that could dramatically reduce our dependence on fossil fuels already exist and have been proven to work. There is no shortage of energy in the world, more development of wind, hydro-power, tidal- and solar- power could provide enough energy for global needs.
Real action is needed to put more pressure on governments to provide more funds and put in place meaningful policies to ensure that an environmental catastrophe does not happen.
Posted by london communists at 5:50 AM