An Indian spotlight on the communist world 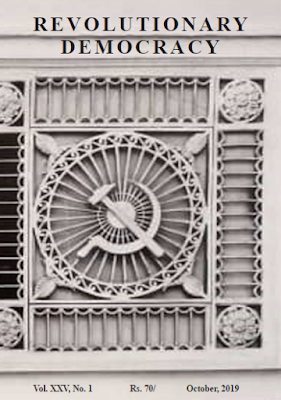 This twice yearly Indian Marxist-Leninist journal has caught up with its publication schedule, with the October issue now available.
As is the custom, the first section is devoted to contemporary India. It begins with an article with the self-explanatory title of Obituary of a Liberal Democracy: Ushering in Hindu Rashtra. This is a depressing survey of the widespread electoral triumph of the incumbent Hindu-fascist Bharatiya Janata Party (BJP) alliance, which won 353 seats out of the 545 seats in the Lok Sabha in the 2019 parliamentary elections. Following are two pieces that confirm the malign effects of BJP rule on India. The first is an account of the state of the Indian rural population, from figures provided by the official Indian statistical body (a second article on the urban working class will follow). In many respects the already low living standards in the countryside (where 72 per cent of the labour force live) are showing signs of decline. The second deplores the BJP’s recent budget, which falls far short of its election promises and is obsessed with attracting foreign investment.
The death of Tufail Abbas, a sometime member of the Communist Party of Pakistan and founder of Pakistan’s airline workers union, is marked not only by a number of tributes but by a translation of an extract from his autobiography that includes fascinating details of a trip to China in 1966 at the height of the Cultural Revolution.
The second section is concerned with materials from parties affiliated to the International Conference of Marxist-Leninist Parties and Organisations (ICMLPO). These include items about recent developments in Ecuador, Turkey’s military actions in Syria, and Bolivia. The latter, from the Revolutionary Communist Party of Bolivia, takes an extremely hostile view of Evo Morales whose Movement of Socialism (MAS) is accused of selling out almost as soon as it first came to power in 2006. If that were indeed the case one might wonder why there was any need to depose him last November.
Half this issue is taken up with archival materials of both theoretical and historical interest. The most recent one is a 2004 article from the Russian Communist Workers Party that condemns the economic policies of the Communist Party of the Russian Federation as a retreat back to Trotsky’s ‘market socialist’ theories. This ties in with the oldest piece, a 1926 article translated from Under the Banner of Marxism. Here we learn in great detail about the development of Karl Kautsky’s theories on imperialism in his various writings between 1898 and 1912. These theories, which had such a baleful influence in the German Social Democratic Party, later became widespread under different labels, which makes an understanding of them important today.
Pod Znamenem Marksizma to give Under the Banner of Marxism its proper name, was an important early Soviet philosophical journal published between 1922 and 1943. It would be useful to see other articles from this source that are not as well-known as they ought to be.
There is also a translation of an internal report made in 1947 for the leadership of the Communist Party of the Soviet Union (CPSU) on the recent history and activities of the Communist Party of India (CPI) just after India formally became independent. It includes the CPI’s views on the British Labour Party, the party’s views on the dangers of Japanese imperialism during the war, and its changing views on the establishment of the separate Muslim state of Pakistan.
We also have a 1952 article about political events in Poland in the run up to the 1948 foundation of the Polish United Workers Party with a merger between the communist Polish Workers Party and the Polish Socialist Party after many complex battles within the two parties.
Two shorter pieces are a 1954 memoir of the Italian communist leader Palmiro Togliatti in 1935 which suggests that the standard Marxist definition of fascism as the “open terroristic dictatorship of reactionary finance capital” was Stalin’s own. This is followed by a prophetic 1956 letter to the General Secretary of the CPI arguing that Khruschev’s attacks on Stalin, were in fact an attack on Marxism-Leninism itself.
Just occasionally the translations could do with an extra polish but that should not deter readers who will find much of interest, even if the ICMLPO is not to everyone’s taste.
Posted by london communists at 5:55 AM