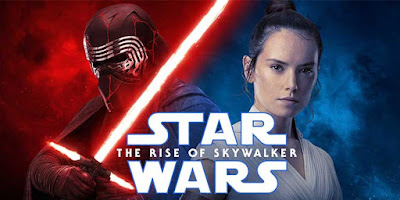 Star Wars Episode IX: The Rise of Skywalker (2019), 12A,  144mins, on general release.
Director: JJ Abrams. Writers: Chris Terrio, JJ Abrams, Derek Connolly and Colin Trevorrow;  based on characters created by George Lucas. Starring: Carrie Fisher, Mark Hamill, Adam Driver and Daisy Ridley.
In what is set to be the last in the 42-year-long series of films, I have to say there was something missing. Was it really what fans of the franchise have been waiting for? Perhaps the problem was there was just too much going on in the story. We see key characters die and come alive again, whilst we see the return of long-dead villains, and the age-old conflict between the Jedi and the Sith appears to be resolved. I almost laughed out loud when Rey, played by Daisy Ridley, walks through the remains of the Death Star destroyed at the end of the first film.
Some dismiss the franchise as reactionary fantasy. I shall, however, point out that in an interview the series creator George Lucas stated that there was more cinematic freedom in the Soviet Union than in Hollywood. Meanwhile, some storylines such as the battle on the Forest Moon of Endoor in Return of the Jedi have similarities with the Vietnamese liberation struggle. The Rise of Skywalker did contain an element of this – but in my opinion not enough.
Richard E Grant plays a very convincing First Order Commander, Allegiant General Pryde; although one wonders how this character appeared out of nowhere. The beleaguered rebels go in search of a device enabling them to find a new-found enemy. We also see a unique situation where cavalry is used against a space ship. In The Last Jedi we saw Second World War style bombers used in zero-gravity. It’s not surprising that in recent years the franchise has been re-classified from Sci-fi to fantasy.
To conclude, perhaps The Rise of Skywalker is telling us that maybe it’s time the series came to an end. Even so, I was still a little disappointed with this rather sad farewell instead of a grand finale. To any Star Wars fans reading May the Force be With You it looks like we are going to need it.
Posted by london communists at 6:01 AM