No to Sanctions! No to War! 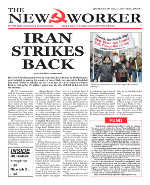 The deranged actions of Donald Trump threaten to plunge the entire Middle East into flames. The assassination of Iranian General Qasem Soleimani, whom the Iraqis say was lured into an American trap in Baghdad, has led to inevitable Iranian reprisals against the US military presence in Iraq.
Trump didn’t bother to tell Britain or his other European allies that he had ordered Soleimani’s death although he did, apparently, inform the Israelis. That’s not surprising because the US war-lord takes all his European NATO allies for granted and he knows he can always count on the grovelling support of the Johnson government.
Appeasing the USA is second nature for the Conservatives, the Liberal Democrats and indeed many of the Blairite dregs in the Parliamentary Labour Party. The Labour leader, however, has publicly condemned Trump’s criminal actions.
Jeremy Corbyn said: “The US assassination of Iranian general Qasem Soleimani is an extremely serious and dangerous escalation of conflict in the Middle East with global significance.” And in parliament Corbyn asked how the assassination was justified under international law.
The mealy-mouthed answer from the Defence Secretary was simply to repeat the nonsense coming from the White House.
Defence Secretary Ben Wallace said: “From the information and intelligence I have seen it is clear that there is a case for self-defence to be made, about an individual [Soleimani] who had come to Iraq to co-ordinate murder and attacks on US citizens,” whilst Corbyn’s comments were dismissed as “anti-America, anti-imperialistic guff” and the “usual tripe”.
Trump’s troops prop up the feudal Arab princes who do the USA’s bidding in return for a slice of the oil profits that rightly belong to the Arab masses. Trump’s administration continues to support the feudal Saudi king’s war in Yemen that has cost tens of thousands of lives and brought the country to the brink of the worst famine it’s seen in 100 years.
Trump destroyed all hopes for peace in the Middle East when he tore up the nuclear deal with Iran and told the Palestinian Arabs to accept his worthless “deal of the century” that gives the Zionists everything they want. Now he’s taken the region to the brink of a new war that imperialism can never win.
Last year communist and workers’ parties, including the New Communist Party of Britain (NCP), “condemned the US administration and its hawkish representatives such as Mike Pompeo and John Bolton for initiating the rising tension and threats of military action on Iran, as well as the use of economic sanctions as a means of starving the people of Iran into submission. They further believe that these actions are having a disastrous impact upon the continuing struggle of the Iranian people for peace, sovereignty and social justice, as well as for human and democratic rights.
“The aim of US policy regarding Iran is to secure the undisputed domination of US imperialism and its allies in the region. The actions and policies of the US administration on Iran have been and continue to be co-ordinated with those of the governments of Israel and Saudi Arabia…the future of Iran and its political system is a matter that should be determined by the Iranian people and them alone. The communist and workers parties, together with all progressive forces in Iran, reject foreign intervention in their country under any pretext.
“They call on all forces campaigning for peace and disarmament globally to condemn the US administration and its Saudi and Israeli allies’ politics of confrontation with the Islamic Republic of Iran in contravention of the UN Charter. No to Sanctions and No to War on Iran!”
Posted by london communists at 3:50 PM