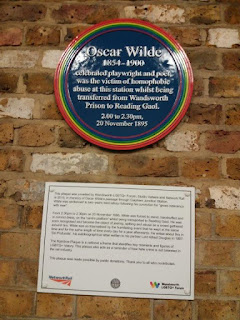 By Carole Barclay
Clapham Junction is the final destination for comrades coming by rail to the Party Centre. A train departs every 30 seconds and about 110 trains per hour pass through the station throughout the day. Said to be the busiest station in the world, it heaves with commuters during the rush-hour. And some will stop and stare at the dedication to Oscar Wilde on Platform 10 that recalls the humiliation suffered by the famous Victorian playwright on that very spot in November 1895.
Nowadays Oscar Wilde is remembered as the poet and playwright whose career was destroyed when he was jailed for two years for “gross indecency” under the repressive homophobic laws of the time. His plays, his wit and his outrageous vanity made him the talk of the town. But his relationship with Lord Alfred “Bosie” Douglas sparked off the lasting animosity of Bosie’s father, the Marquess of Queensberry, that led to Wilde’s downfall.
These days Wilde is a gay icon – partly because his plays, which have stood the test of time, can still draw in the crowds, but largely because he was a victim of unjust laws that sent him to jail, ruined his health and forced him out of the country after his release from prison.
Wilde’s failed libel suit against Queensberry that led to the criminal prosecution has been the subject of many books and screen adaptations. The trial was just the beginning of his final humiliation. Part of it was when he had to endure the jeers of the mob for 30 minutes whilst waiting as a prisoner on Platform 10 for a train to Reading jail.
He told Bosie: “On the November 20, 1895 I was brought down here from London. From two o’clock till half-two on that day I had to stand on the centre platform of Clapham Junction in convict dress, and handcuffed, for the world to look at.
“I had been taken out of the hospital ward without a moment’s notice being given me. Of all possible objects I was the most grotesque.
“When people saw me they laughed. Each train as it came swelled the audience. Nothing could exceed their amusement. That was, of course, before they knew who I was.
“As soon as they had been informed they laughed still more. For half an hour I stood there in the grey November rain surrounded by a jeering mob. For a year after that was done to me I wept every day at the same hour and for the same space of time.”
Laws have changed but homophobic attitudes linger on. This is why the local LGBTQ+ forum took up the campaign to put the Wilde plaque on Platform 10. David Robson, the chair, said that at a time when people are still under threat because of their sexuality, the plaque would act as a reminder that hate crime is not tolerated in the rail industry.
“As a community forum we felt we had to respond to this historical wrong," he said.
"The Rainbow Plaque is a wonderful scheme through which we can use culture to make our hidden histories (good and bad) visible.”
The Oscar Wilde plaque was unveiled in July 2019 by the Mayor of Wandsworth, Cllr Jane Cooper. The Wandsworth LGBTQ+ forum conceived of the idea of the plaque during a screening of Rupert Everett’s Wilde biopic, {The Happy Prince}, at the Out at Clapham monthly Queer film club. The campaign was also supported by Studio Voltaire, a non-profit gallery and artist studios based in Clapham.
Posted by london communists at 5:41 AM