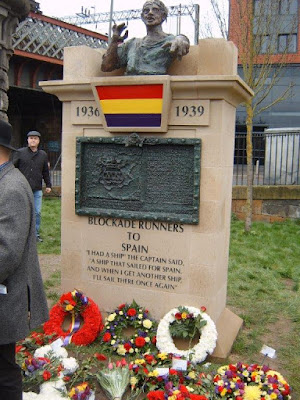 Last Saturday saw the unveiling of a memorial to those British seafarers who broke the blockade of Republican Spain during the Spanish Civil War. It is situated on the riverbank beside the main railway bridge into Glasgow and near the more famous statue of La Pasionaria. The unveiling was the end product of fifteen years effort and was financed by transport union RMT’s Glasgow Shipping Branch.
While the memorial highlights the thirty-five Merchant Navy and the eight Royal Navy seafarers who died on vessels attacked by submarine, naval and aerial forces under fascist control between 1936-38 it also pays tribute to all those seaman who broke the Francoist blockade. They helped bring desperately needed supplies to Republican areas, and in the final stages of war, evacuate refugees.
More than a hundred attended to hear from local union officials, the monument’s sculptor Frank Casey, Jim Jump for the International Brigade Memorial Trust and RMT General Secretary Mike Cash.
Jim Jump described how British “non-intervention” was of course nothing of the kind, it was active support for the fascist rebels. Thus the Royal Navy did not even clear mines laid by Franco nor retaliate when its ships were attacked.
Several British shipping firms attempted to break the blockade, attracted by the high freight-rates. The National Union of Seamen won high bonuses for undertaking dangerous voyages, but the sailors generally supported the republic and generously donated wages for relief work. Indeed the sole British survivor of the International Brigade was a seaman who jumped ship in 1937 to join the Brigade.
In addition Mike Arnott, Scottish IBMT secretary, focused specifically on Scottish support for the Spanish Republic and listed the nine seafarers from Aberdeen, Dundee and Glasgow who died while running the blockade. After the monument was unveiled and wreaths laid. The ceremony ended with a rousing rendition of the Internationale led by musician Eddie McGuire.
Posted by london communists at 8:18 AM