Another view on Brexit 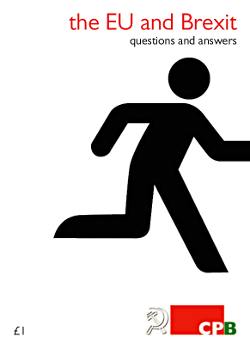 The EU and Brexit Questions and Answers by Robert Griffiths. Communist Party of Britain. £1:00.

This pamphlet by Robert Griffiths, General Secretary of the Communist Party of Britain (CPB) is a source of useful information on Brexit.  The CPB and the New Communist Party both support withdrawal from the European Union and advocated Leave in the Peoples Vote of 2016.
Meanwhile Remainers have continued with ‘Project Fear’ which was the basis of their original campaign.  Their billionaire backers continue to call for a second referendum which they have the arrogance to call a ‘People’s Vote’.
Some Remainers call for the goal posts to be moved in another referendum by allowing children to vote in it.  Their assumption is that those subject to a life-time of pro-EU propaganda to will vote Remain.
Remain propaganda describes Leave voters as stupid while spreading wild talk about the “civil unrest” and “martial law” that they say will follow Brexit and  telling us that British aircraft will not be able to land in the EU and that we will no longer be able go on holiday to Europe when we leave the European Union.
You may be familiar with the BBC2 satire, the Mash Report –  a programme almost entirely dedicated to supporting EU membership. So much for an unbiased BBC. In this light a pamphlet answering important questions about the EU is welcome.
The pamphlet’s format is a series of questions and answers on key aspects of Brexit.  Griffiths refutes many of the myths about the EU and provides useful information; covering the structure of the EU, workers’ rights, economic policy, immigration, trade and defence.
He starts with the reactionary, Cold War origins of the European Union as an economic bulwark against socialism.
He explains that the European Court of Justice has never upheld the right to strike or prevent employer lock outs.  Meanwhile the European Court of Human Rights, which is outside the EU, provides some protection against abuse.  Arguably ‘human rights’ in Britain date back to Magna Carta and have developed over time to include Parliamentary Sovereignty established during the English Civil War, the extension of the franchise in the early nineteenth century to all adults by 1928 as well as legislation on race, gender equality and rights for LGBT people.  Will this will end when we leave an institution which is far from democratic?
On economic policy he explains that the European Central Bank imposes monetarist policies on members through the Stability and Growth Pact.  He does not cover the issue of whether the EU prohibits nationalisation.  Strictly speaking it does not.  However, EU law is based on competition and the free-market; in short capitalism.  EU law states that all areas of the economy are open up to competition; this includes health and education.  It poses questions such as bringing back key NHS services in house as well as taking academised schools back under local authority control.  Polly Toynbee, a fervent supporter of the EU, has said that continued membership makes this almost impossible.  If the question was does EU law prevent an extensive nationalisation programme and socialist planning the answer is yes.
Griffith points out that the UK has a trade deficit with the EU and that our share of trade with it is declining, something you’d think Mrs May might mention in negotiations.  On foreign policy he refutes the notion that the EU is a force for peace.  He lists places where EU states are involved in conflicts; in short imperialist aggression.  His list includes Zaire, which has been called the Democratic Republic of Congo since 1997.  Griffiths also misses the opportunity to remind us of EU support for the fascist coup in Ukraine; a fact that some pro-EU liberals might find embarrassing.
He explains that the UK and Ireland have had a common travel area since 1923, which was suspended during World War Two and the Troubles (1969-93).  The Good Friday Agreement (1998) made no mention of EU membership or border operations.  The left position, which Griffiths fails to point out is for an end to the Union between Britain and Ireland.
Another criticism is its shortness; however, if you are putting a point across short, bitesize pieces of information are often best.  He also fails to criticise the Labour front bench for ruling out a no deal Brexit.  This may not be the desired outcome but a willingness to walk away from negotiations actually strengthens your position.  However, if you want to understand the EU and advocate a People’s Brexit the pamphlet is worth the £1 price tag.

Posted by london communists at 4:24 AM