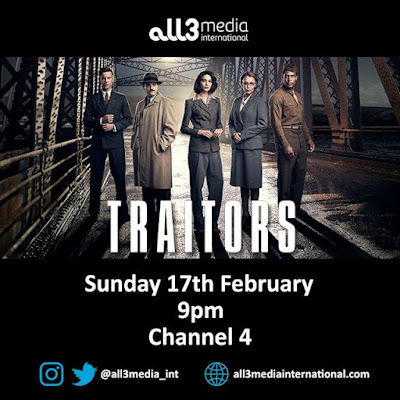 Have you heard it said that Channel 4 used to make really good programmes but in recent years it has gone downhill?
Traitors, its new Sunday night drama, confirms this view; the programme can only be described as a nasty piece of Cold War anti-communist propaganda. Set at the end of World War Two with the backdrop of the Labour election victory in 1945, the drama follows the story of Feef Symonds, played by Emma Appleton, a young upper-class woman from a high-Tory background with a boyfriend in US intelligence.
The dialogue is inter-laced with references to food shortages, which the main character blames on socialism. Meanwhile the USA is shown as place of material abundance and the free-market. Feef trained to be an intelligence operative at the end the war but her career plans came to a premature end, possibly as a result of defeat of fascism by the Red Army.
Instead of working as a spy she finds herself in the civil service analysing wood requirements for the new house-building programme, which she finds surprisingly dull.
Her boyfriend soon introduces her to Rowe, a shadowy Cold-Warrior working for US intelligence. Rowe tells her that Britain is weak, which is why they have elected a Socialist Government.
They both ply her with anti-communist propaganda, to which someone from her privileged background would be naturally receptive. If I was not already aware, I would have thought that the Soviet Union was the aggressor in the Second World War and Nazi Germany the innocent victim. Feef soon finds herself working for US intelligence spying on her own government, which by the end of the episode is a Labour one.
Some readers may have been fans of Foyle’s War, a police drama set in wartime Hastings. During the war the villains were Fascist sympathisers, black-marketers and upper-class shirkers. In one episode members of the pro-communist ‘Peoples Convention’ were shown in a positive light. The series went downhill when the war ended. Arguably it had run its natural course – after all, what is the point of Foyle’s War without a war? With the end of hostilities with Germany, the Soviet Union and hence the left become the bad guys.
Traitors on the other hand has none of the initial redeeming features of Foyle’s War.  It is often said that racist hate crime has its origins in the mainstream media, which fuels the fascist right. Recently there have been at least two instances of attacks on Karl Marx’s tomb by fascists. These attacks have their origins in anti-communist propaganda, in this case emanating from Channel 4.
Posted by london communists at 4:17 AM