The Joke’s on Us 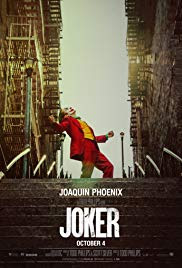 Originally a comic book character who first appeared in 1940, the Joker was been played by Cesar Romero in the original television series and Jack Nicholson in the 1989 film Batman.  Whilst appearing in numerous computer games and comics, this demented clown faced villain maintains his place in film and other entertainment media.
Now, in what appears to be a highly successful blockbuster movie, Joaquin Phoenix attempts to portray the origins of the famous Batman villain. Joker is set in a vague version of the past somewhere between the 1970s and 1990s. Arthur Fleck, a fantasist with mental health problems working as a clown with ambitions to be a stand-up comedian, lives alone with his elderly mother and stalks local women.
The story is set in Gotham City – a very dark caricature of US society. Gotham, a crime-ridden hell-hole forever under siege from strange and dangerous criminals whilst guarded over by the aristocratic Wayne family. First in the form of wannabee mayor Thomas Wayne and later with his son Bruce Wayne aka Batman.
This is in contrast to the Metropolis of Superman; a much more meritocratic place where the ambitious come to make successful careers for themselves.
In this film, Thomas Wayne states that the rich view the rest of us as little more than clowns. These remarks fuel protests where activists take to the streets wearing clown masks, with obvious parallels to the Occupy Movement of a few years ago.
With this in mind, one begins to wonder who the real villains are. Are they downtrodden individuals like Fleck, whose life seems to go from bad to worse?
Fleck’s career as a stand-up comedian doesn’t exactly work out. He loses his job as a clown and is told that funding for his mental health programme is to be cut. Meanwhile, the likes of Wayne live in walled mansions away from the problems of ordinary folk whilst believing they have an almost divine right to rule.
Joker is ultimately a story of an individual at the very bottom of society driven to despair; raising the question of are some people inherently bad or does society make them that way? The film also raises the issue of mental health and for Americans, gun ownership. The graphically violent scenes are in stark contrast to the cartoon violence of the 1960s original Batman series. This film literally holds no punches.
Posted by london communists at 5:02 AM