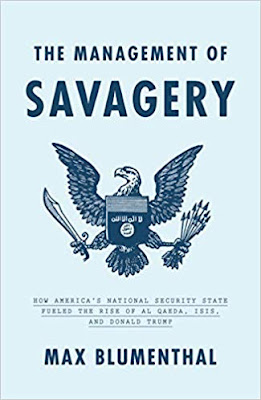 Any reader of the New Worker should be familiar with the author who contributes to the GrayZone, a website which uses investigative journalism to expose imperialism’s actions against progressive countries. Max Blumenthal’s book goes a long way to exposing how the USA and its allies have gone about trying to create chaos in Middle Eastern countries that have historically been allied with the former Soviet Union and now Russia. The purpose of this was to allow Israel, Pakistan, Turkey, Saudi Arabia and Qatar to provide either political or material support for extremist terrorist groups within Afghanistan, Iraq, Libya, Yemen and more lately Syria.
His book starts by detailing the close interaction between the US intelligence agencies and reactionary Wahhabi Muslims who are actors in a proxy war of jihad designed to destabilise and destroy progression towards a more egalitarian society in Afghanistan. Their providing of Stinger anti-aircraft missiles and anti-tank rockets to the Mujahidin via Pakistan helped them to weaken Soviet military forces, allowing the reactionaries to become entrenched. The eventual removal of Soviet forces by Gorbachev led to the overthrow of the civilian government, and the imposition of the Taliban and sharia law.
Later, after the destruction of the World Trade Center in 2001 by the very same people they had trained against Soviet forces in Afghanistan, George W Bush declared “war on terrorism”. Blumenthal goes on to explain that what Bush meant was the hatching of a plan by the neoconservatives, dreamt up by the Office of Special Plans, to carry out regime change in seven countries in five years. He started with Afghanistan and Iraq, although it was well known that Saddam Hussein and the Baath party had no links with Al Qaeda. The UK and other NATO allies joined in with the blood-fest, much to the shame of a Labour government under Tony Blair. Hundreds of thousands of people were killed, injured and made homeless in the ensuing conflict.
This policy continued after Republican Bush was superseded by Democrat Barack Obama, with his sanctioning of the bombing of Libya and the support of extremist rebels under the guise of ‘military humanism’ or carrying out pre-emptive military action to prevent a genocide. The UK was also fully engaged in the regime change of Libya and gave material support to the Abedi brothers to go fight there. One later returned to carry out the bombing atrocity in Manchester.
It was Hillary Clinton who garnered support for an invasion of Syria using the same military humanism mantra following unverified reports of chemical weapon atrocities there. Blumenthal goes on to highlight the known facts of what had occurred and how the Organisation for the Prohibition of Chemical Weapons (OPCW) has had to admit that there is no evidence that Assad has used such weapons against his own people. The book highlights the nefarious nature of the so-called ‘White Helmets’ rescue brigade that was set up by a British former intelligence officer. They have been shown to offer support only for the ‘rebel’ forces in Syria and even assist them remove bodies at ISIS/Al Nusra execution sites. His exposé of the various so-called ‘moderate rebels’ and how they are all linked to either ISIS/Al Nusra/Ahrar front shows what a sham the promoters of ‘military humanism’ are.
The book also emphasises how anti-Muslim sentiment was whipped up by the US media following 9/11 despite the USA continuing to be one of the main supporters of reactionary Saudi Arabia, Bahrain, United Arab Emirates and Qatar.
The objective of the USA and its allies of regime change in Syria ended in failure after a huge human and material cost. This book doesn’t cover it but next in the cross-hairs of US imperialism is Iran.
Blumenthal recently blogged a detailed response to a Times Literary Supplement critique of his book that demolishes every point made by Lydia Wilson.
I would strongly recommend readers to buy this book because it is well written and packed with lots of useful information. Hardback costs approximately £15.25 from the Hive.co.uk.
Posted by london communists at 12:26 PM