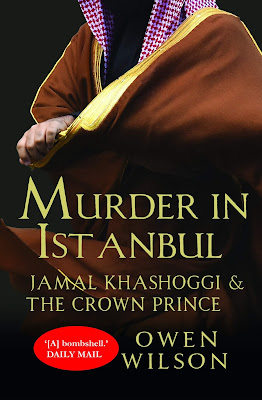 Last year a prominent Saudi journalist was murdered at the Saudi Arabian consulate in Istanbul by hitmen acting on orders from the Crown Prince of the oil-rich Arabian kingdom. According to the Turkish media Jamal Khashoggi was killed, chopped up in to 15 bits and packed into five suitcases for disposal and the consulate swept clean of evidence on 2nd October 2018.
The gruesome record of Jamal Khashoggi’s last moments selectively supplied by Turkish intelligence has spun around the world shedding light on the true nature of the House of Saud that Khashoggi had served for over 30 years. But it left many questions unanswered. This isn’t a whodunit. Everyone knows who did it. The mystery is why?
This book goes some way to answering them. Written by Owen Wilson, a former Financial Times journalist who has now made a name for himself as a crime writer, Murder in Istanbul, draws on Turkish and Arab sources to give a blow by blow account of the events leading up to Khashoggi’s death last year.
Jamal Khashoggi was the most unlikely dissident. He was of Turkish descent. His grand-father, like many others, went to the desert kingdom to seek his fortune as a doctor in the service of the House of Saud in the 1920s. His uncle was the flamboyant Saudi arms dealer Adnan Khashoggi. His cousin was Dodi Fayed, who died with Princess Diana in a car crash in 1997.
Jamal led a more modest life as a successful Saudi journalist who had close ties with the royal family and Saudi intelligence. He was a devout Muslim who supported the House of Saud and its long-standing alliance with US imperialism. But he fell out of favour when he publicly started to criticise foreign policies associated with Crown Prince Mohammed Bin Salman and Donald Trump, and went into voluntary exile in the USA in 2017.
There he earned the wrath of the Saudi authorities by writing articles for the Washington Post that criticised the Crown Prince and called for reforms in the feudal Arab kingdom that went far beyond the cosmetic measures of allowing women to drive or go to sports stadiums that the kingdom had taken to appease liberal opinion in the West.
That, in itself, wouldn’t warrant death, even by the sordid standards of Saudi Arabia. There must have been a much more powerful reason to silence him. Perhaps he simply knew too much about the private lives of the princes. Or, as this book suggests, he was privy to Saudi Arabia’s nuclear ambitions. His links with the Muslim Brotherhood and Qatar – both loathed and feared by the Saudis – may have also sealed his fate.
Although Khashoggi knew he was at risk entering the consulate to get documents needed for his forthcoming marriage, in some way he believed he was safe from harm. Maybe the rumours that he was a CIA asset were true. Perhaps it was just his friendship with Turkish president Recep Tayyip Erdoğan. But if he believed he was protected he was clearly much mistaken.
You must judge for yourself. The author raises all these issues in an immensely readable book that goes far beyond the usual ‘true crime’ genre. It is essential reading for all students of contemporary Turkish and Arab politics, and it’s on sale at your local bookshop now.

Posted by london communists at 7:35 AM