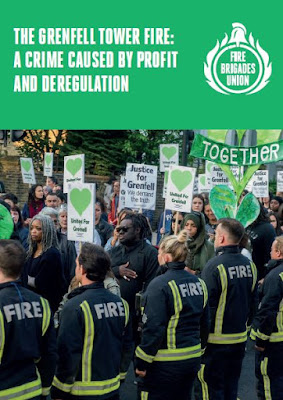 The Fire Brigades Union (FBU) has firmly blamed every government since the Thatcher era for the Grenfell Tower fire. This is the main thrust of a new pamphlet by the union that was launched at Labour Party conference in Brighton this week.
Entitled The Grenfell Tower Fire: A crime caused by profit andderegulation, the report claims that successive governments have failed to regulate high-rise residential buildings properly for fire safety because they have ignored the views of firefighters, heeding instead “management consultants, industry lobbyists and chief fire officers”.
FBU general secretary Matt Wrack said: “The terrible loss of life at Grenfell Tower was ultimately caused by political decisions made at the highest level. For at least 40 years, policies relating to housing, local government, the fire and rescue service, research and other areas have been driven by the agenda of cuts, deregulation and privatisation.”
The pamphlet did not spare the Labour government for the 2004 scrapping of the Central Fire Brigades Advisory Council, which governed fire safety from 1947 and delivered many of the major improvements in fire protection, along with the abolition of national standards for fire and rescue services.
Going further back it decried Edward Heath’s government for removing a requirement for blocks of flats to have mandatory fire certification from the final Fire Precautions Bill 1970 on cost grounds and for ignoring a recommendation that only those with “operational firefighting experience” be responsible for enforcing fire safety, thus paving the way for privatisation of the fire safety regime.
The Thatcher government later cut building regulations from more than 300 pages to just 25, ceasing a formal requirement, again due to the “significant financial burden” of the legislation.
The Major government privatised the Building Research Establishment, opening a conflict of interest between its role providing advice to ministers and its commercial role in testing materials for construction firms.
David Cameron’s Coalition government cut fire budgets by around 28 per cent in real terms whilst his “one in, two out” policy on new regulations slashed regulations further, with Eric Pickles, then Communities Secretary, repealing various local building acts’ fire safety measures. The pamphlet concludes by claiming that the lessons that should have been learned, such as the Harrow Court fire in 2005, the Lakanal House fire in 2009 and the Shirley Towers Fire in 2010, have been scandalously ignored.
One area in which the lessons of Grenfell have not been learnt is the staffing levels in the Fire Brigade. Last week the FBU organised a protest outside Surrey County Hall in Kingston upon Thames to highlight the state of the service. Pointing out that there are not nearly enough firefighters and emergency fire control staff for the county, the union attacked plans to cut a further seven fire engines at night.
Surrey Fire Control is now expected to take on mobilisation duties for firefighters in West Sussex. One-hundred and thirty-five or 18 per cent of firefighter positions were lost between 2010 and 2019. Last December the Inspectorate of Constabulary and Fire and Rescue Services voiced “serious concerns” about the service’s effectiveness and efficiency in keeping people safe and secure from fire and other risks. Firefighters are constantly moving between fire stations to keep the fire engines available for calls, leaving crews overstretched and demoralised. The service depends on firefighters coming in to work on their off-duty days in order to make the fire engines available for calls.
In response, management have disciplined firefighters for telling their politicians about risks to the community from cuts.
Lee Belsten, the local FBU secretary, said: “Conditions in Surrey fire and rescue service simply aren’t safe for members of the public, or firefighters for that matter. Firefighters work tirelessly to keep people safe but they have had enough. Our members have told us that they won’t stand by and put up with dangerous staffing arrangements for any longer. The union has tried engaging constructively but [we] have been dismissed by management and the County Council. It’s shameful that it has come to this but we cannot continue to compromise public safety.”
The union has warned it will soon be balloting for action if its demands are not addressed.

the pamphlet is available from the FBU and it can be downloaded from their website.
Posted by london communists at 3:50 AM