Red Salute to Marx in China 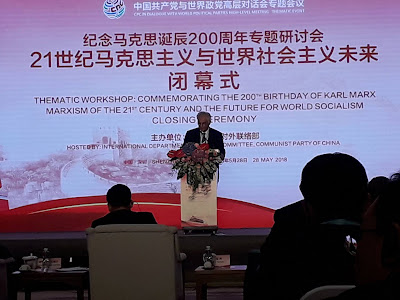 NCP leader Andy Brooks took part in an international seminar titled “Marxism in the 21st Century and the Future of Socialism in the World” that was held in People’s China last week. Over 100 leaders and representatives of 75 communist parties from 50 countries from around the world met in China’s innovative hub of Shenzhen to mark the 200th anniversary of the birth of Karl Marx.
Forty years ago Shenzhen was just a small fishing village on the border with the then British colony of Hong Kong. Now it is a hi-tech megacity with over 12 million citizens which some believe will eventually merge with Hong Kong to form the biggest city in the world.
Over 60 Chinese communist activists and scholars also took part in the conference which opened with the Internationale on Monday 28th May. This was followed by a congratulatory message from Chinese President Xi Jinping, the leader of the Communist Party of China (CPC), in which he said that the CPC was willing to have more dialogues, deepen exchanges and cooperate with various political parties and organisations in the world, including communist parties, to promote the construction of a community with a shared future for humanity and a better world.
In terms of the nature of science and truth, influence and spreading scope, there is no thought or theory that can attain the height of Marxism, nor is there a theory that has had such a tremendous impact on the world in the human history of thought, Xi said.
“Chinese communists have been persistently adapting Marxism to the times and advancing its sinicisation and popularisation, scoring a series of achievements in theoretical innovation, promoting socialism with Chinese characteristics to enter a new era, and displaying the vigour and vitality of scientific socialism in the 21st century,” Xi said.
Song Tao, head of the International Department of the Communist Party of China who opened the conference said that as China develops in the new era, it continues in the spirit of Marxism. He also said that the CPC will work and update the application of Marxism in building a shared community.
“Our ‘socialism with Chinese characteristics’ is people centred. It is a theory and a practice for the people's self-emancipation,” Song said. “It is the people who will judge whether the CPC is doing a good job, unleashing their creativity and making them the masters of the nation”.
Senior communist representatives from Cuba, the Czech Republic, Russia, South Africa and Vietnam also spoke during the opening session.
In his speech, Andy Brooks said: “In the opening words of the Communist Manifesto in 1848 Marx and Engels said ‘A spectre is haunting Europe - the spectre of communism’. That spectre is still there, despite all the twists and turns of the past 150 years. Now it haunts the entire globe because socialism is still charting the future in Asia, in Democratic Korea, People’s China, Vietnam and Laos and the Caribbean island of Cuba.
“While millions of people scrabble to earn a living just to keep a roof over their heads a tiny elite live lives beyond the reach and often beyond the imagination of most workers. Only socialism can end this. Only through socialism can the will of the masses, the overwhelming majority of the people, be carried out. Only socialism and mass democracy - not the sham democracy of the bourgeoisie or the myths of the social democrats, can end the class system and free working people from their slavery”.
Posted by london communists at 2:01 AM