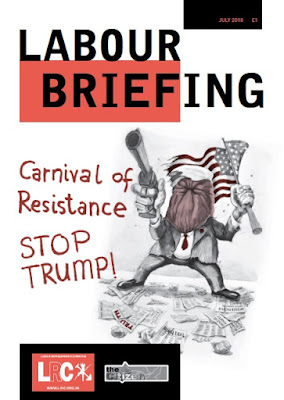 Labour Briefing has a long and confusing history which could easily fill this whole page and make a good cure for insomnia. It began as London Labour Briefing in 1980. It was sometimes known as Labour Left Briefing eventually becoming Labour Briefing in 2007. Fortunately dropping the word “Left” did not signify any change of political direction.
Undaunted by its diminished influence during the Blair years it has outlived other voices of the Labour left such as Socialist Campaign Group News and even the venerable Tribune magazine. In 2012 it became the organ of the Labour Representation Committee (LRC), to which the NCP is affiliated. Some members of the original editorial board who were unhappy with this decision even produced their own journal with the same title just to cause confusion.
In 2014 this Briefing took over the Citizen, the voice of the Campaign for Socialism which is the equivalent of the LRC north of the border.
Early contributors included Tony Benn and Ken Livingstone. In 1982 it carried an article arguing against the expulsion of Militant Tendency supporters from the Labour Party from the pen of an obscure young Labour councillor in Haringey called Jeremy Corbyn.
The June issue of what has now become an elegantly produced substantial monthly of 32 almost entirely ad-free pages carries news and features from across the country and abroad.
This issue has interesting post-mortems on the recent local election results including an in-depth analyses of the north London borough of Brent which notes that Labour’s vote actually increased from 36.3 to 39 per cent despite media claims that their results were “catastrophic”. It was here that that a prominent pro-Zionist Jewish Labour Movement (JLM) councillor claimed that alleged Labour antisemitism cost the party votes. The author points out that the complainant received the lowest personal vote of the three Labour candidates in his ward and that other places with a high Jewish population such as nearby Hackney saw an increased Labour vote. There is also an interesting critique of the JLM from a Jewish Voice for Labour spokesperson.
There is much on internal Labour Party affairs such as the mechanics of the forthcoming leadership of the Welsh Labour Party. This sort of thing is not to everyone’s taste, but with the left having made important gains in the past two years these things matter much more than in the days of Tony Blair.
Housing looms large, including a long piece on women and the housing crisis. There is news on anti-racist campaigns, recent industrial disputes including fast food workers and traffic wardens in Hackney, and the grammar school controversy among others. Book reviews and a piece on the relevance of pop music for political struggles round off the issue.
It has to be said that Labour Briefing is most definitely “Labour”. Its stance is firmly that of left-wing social democracy. This is particularly marked in the articles on international affairs.
Anyone seeking trenchant Marxist-Leninist analyses is going to be disappointed. But this issue contains an article by Shadow Chancellor John McDonnell commemorating the 200th anniversary of the birth of Karl Marx, something not seen since the Labour Party published a centenary version of the Communist Manifesto in 1948!

Posted by london communists at 3:45 AM