Dinosaur chic in the Jurassic world

The term dinosaur is often a by-word for anything either actually dead or in some way out of date.  A few years ago anyone who suggested that rampant privatisation, or perhaps said that the water industry should be taken back into public ownership, was described as one.
These creatures actually died out about 65 million years ago probably the result of an asteroid hitting the planet. But in the Jurassic Park and Jurassic World franchise, through very clever genetic engineering, they have been brought back to life.
These films, based on the books of Michael Creighton are a more traditional type of science fiction; in many ways closer to the original science fiction stories such as Mary Shelly’s Frankenstein. These stories exaggerate the scientific possibilities and play on the fears, generated by them, of the contemporary age. 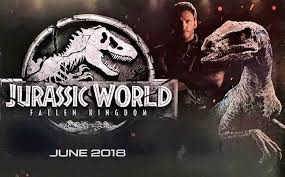 The opening scenes make parallels between an imagined re-extinction of the dinosaurs on a Costa Rican island and actual species faced with extinction. We see Dr Ian Malcolm, played by Geoff Goldblum, who features in the earlier Jurassic Park films, argue against a rescue plan for the dinosaurs. Arguing for a rescue plan are a kind of dinosaur Greenpeace led by Claire Dearing, the lead character in the earlier Jurassic World.
The most recent film Jurassic World: Fallen Kingdom, like most action adventure films, has its heroes and villains. The heroes are, of course, Claire Dearing, a corporate events organiser played by Bryce Dallas Howard (Jurassic World, Spider Man III and As You Like It).  She is aided by Owen Grady, a former US marine played by Chris Pratt (Jurassic World, Guardians of the Galaxy and The Lego Movie) and they are assisted by a computer nerd and some kind of eco-vet. But it is the film’s villains that pose the more interesting questions.
The film gives the impression that capitalism, and more to the point giant entertainment corporations, are entities created by kindly, paternalistic old men with philanthropic ideas who just want people to enjoy themselves, provided, of course, if they can afford the entrance fees. This wonderful system is somehow spoilt by nasty, bean-counting accountant types who ruin it all by wanting to make a profit.
Anyone with a knowledge of capitalism’s history over the last few hundred years might have noticed that making a profit might just have played a small part it the system’s inner workings.
Watching the film brought to mind the institution of the theme parks. The first were set up in in the USA by the thoroughly sinister Walt Disney; who far from being a nice old man who just wanted people to have fun was, in fact, an anti-Semitic, union-busting racist.
The film’s villains are essentially the bad capitalists. Those who appear really bad are Russian arms dealer types who wish to use dinosaurs for military purposes. But people have been using animals for military purposes since the Bronze Age; although this was mostly tameable mammals as opposed to predatory reptiles.
In one of the scenes dinosaurs are auctioned off for large sums of money. The creatures start to run amok and well, eat people. This is what many of the audience, like the crowds in the Roman arena, have been waiting for. It is in this scene that one of the cowering billionaires pushes his wife, girlfriend or other female consort into the path of a somewhat angry carnivorous monster.
The film contains not only good and bad capitalists but also good and bad dinosaurs.  An example of one is Blue, a velociraptor trained and reared by Owen Grady, who actually becomes a character in the film. I almost laughed out loud when I saw back footage of Grady with the dinosaur behaving more like a kitten or a puppy.  Now, I’m not dinophobic but velociraptors were highly dangerous, predatory reptiles not capable of the emotions shown by mammals. Still it is science-fiction, after all.
Suffice it to say the film does contain a lot of nonsense from an ideological perspective and from what could be described as ‘Science Comedy’. But if you are at a loose end and are able to see through much of the nonsense (and if you are reading this paper you probably can) it still might be worth a visit to your local multiplex.
Posted by london communists at 10:59 AM