The Insidious Intent of Val McDermid 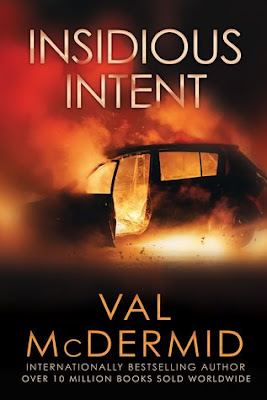 Val McDermid may be one of the best crime writers of our time.  Her novels do not follow the Agatha Christie model of being set in a closed environment where the murderer commits an outlandish crime whilst the number of suspects can be counted on one hand and the amateur sleuth catches them out making the police look incompetent. Instead McDermid’s novels are about the modern process of crime detection: involving the use of DNA and increasingly digital evidence where the field of suspects covers at least an entire country.
Insidious Intent is based around a serial killer who meets single women at weddings and murders them in horrific ways. Something of Jack the Ripper meets The Wedding Crashers.  The novel contains sub-plots involving police corruption and child sexual exploitation.  It raises the issue of how easy it is to infiltrate someone’s wedding reception.  The more intimate working-class receptions set in pubs or social clubs may be harder but not impossible to infiltrate. More lavish affairs set in expensive hotels, where wedding guests mingle with staff and other hotel guests can easily wander in, are easier to crash.
The novel is the latest of a series of stories featuring Detective Chief Inspector Carol Jordan and Tony Hill, a psychological profiler who is able to get into the mind of the killer, understanding their thought processes and working out what they might do next. The story points out that as a result of an unpleasant childhood, Hill himself could have taken the serial killer route had it not been for a twist of fate.  One of the strengths of MacDermid’s plots is that the thought processes of the killer form part of the story, thus making the killer a key character of the novel.
The novel covers the issue of the selfie in the digital age.  Today, when most of us own smart phones with a built-in camera, it is so easy to take informal pictures of friendship groups at parties or nights out. In the story selfies actually provide useful evidence, not as photos of the individuals in the intended picture but from images captured from anyone who may be in the background. Also covered is the role of the digital footprint left by our use of credit cards; which is becoming increasingly convenient since the development of the contactless payment.
This book, like many of Val MacDermid’s novels contains a strong feminist theme.  In an earlier novel Splinter of Silence, a serial killer specifically targets feminists, who he believes have ruined society and can be blamed for everything from marital breakdown to food banks.  The killer in Insidious Intent simply believes his life has been ruined by a particular woman and takes his frustration out on other unsuspecting females, who he befriends at wedding receptions.
A considerable amount of the feminist’s argument runs true.  You need only to look at real life serial killers: Peter Sutcliffe, in 1970s Yorkshire and 'Jack the Ripper' in London in 1888, both targeted vulnerable women.  In 2015 a group of feminist campaigners launched a database referred to as the Femicide Census, giving details of numbers of women killed by men.  According to the database 126 women killed through male violence in 2012, 143 in 2013 and 150 in 2014.
But the point where Marxist-Leninists depart company with feminists is that the greatest injustice todays world is still overwhelmingly one of capitalism and class exploitation.  In the case of most serial killers of women, real and fictional, the whole force of the law and the state is used against them: which is what this book is about.  The fictional serial killers of women in novels and most true to life ones are brought to justice, whilst there are of course plenty of conspiracy theories as to why “Jack the Ripper” was not caught.
Meanwhile those responsible for the installation of flammable cladding in Grenfell Tower walk the streets freely.  The likes of Richard Nixon, Ronald Reagan, Margaret Thatcher and Mikhail Gorbachev (who’s obituary I look forward to reading in this paper), whose actions make those of serial killers look like an annoying hobby, were never brought to justice.  In other words, there are many injustices in this world but those committed by capitalism and imperialism trump, no pun intended, all others.
Meanwhile I for one will continue to read Ms McDermid’s books and other crime novels.  One day I may try writing one myself.  However, if I wanted to cover the worst crimes of our time I would write a history book or make a documentary.
Posted by london communists at 2:14 AM