More than a century ago, thousands of men, women and children shouted those slogans – in many different languages – in the bitter cold of a Massachusetts winter.
On 12th January 1912, thousands of workers walked out of the textile mills of Lawrence, Massachusetts and began a strike that lasted until 24th March 1912. At its height, the strike involved 23,000 workers.
Located in the Merrimack River Valley, about 30 miles north of Boston, Lawrence was a city of 86,000 people in 1912, and a great textile centre. It outranked all other cities in the production of woollen and worsted goods. The woollen and cotton mills of the city employed over 40,000 workers – about one-half of Lawrence’s population over the age of 14.
Most of the Lawrence textile workers were unskilled. Within a one-mile radius of the mill district there lived 25 different nationalities, speaking 50 languages. By 1912, Italians, Poles, Russians, Syrians and Lithuanians had replaced native-born Americans and western Europeans as the predominant groups in the mills. The largest single ethnic group in the city was Italian.
At the time of the strike, 44.6 per cent of the textile workers in Lawrence were women. More than 10 per cent of the mill workers were under the age of 18.
Despite a heavy tariff protecting the woollen industry, the wages and living standards of textile workers had declined steadily since 1905. The introduction of a two-loom system in the woollen industry and a corresponding speed-up in the cotton industry led to lay-offs, unemployment and wage reductions. A federal government report showed that for a week in late November 1911, some 22,000 textile employees, including foremen, supervisors and office workers, averaged about $8.76 for a full week’s work. This wage was totally inadequate, despite the fact that the average work week was 56 hours and 21.6 per cent of the workers worked more hours than that.
To make things worse, the cost of living was higher in Lawrence than in the rest of New England. The city was also one of the most congested in the USA, with many workers crowded into foul tenements. 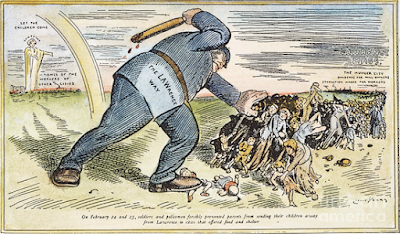