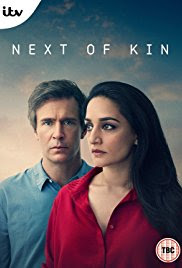 This political thriller is shown on ITV every Monday night and is now into its fourth episode out of six. At the centre of the drama is a British-Pakistani family, who live a mostly affluent lifestyle. The lead female character, Mona Harcourt, is played by Archie Panjabi (Life on Mars, Silent Witness, The Good Wife, Shetland); she is married to a white, upper-middle class business man played by Jack Davenport (Coupling, Pirates of the Caribbean, United Kingdom). The plot centres around the murder of Mona’s brother and the disappearance of her nephew; both events take place in Pakistan.
Like a lot of modern dramas, scenes shift between two distinct places, London and Pakistan, where the search for the missing nephew is taking place. Many of the scenes set in Pakistan are dominated by either hazy sunlight or diminished but still audible sound; is this to give the place a sinister aura? It would appear that the nephew has been radicalised by some form of Islamist Terror group; whilst the family attempt to bring him and his dead father’s body home.
What is the message of the drama? I suspect an Islamophobic one. Namely that however integrated and Westernised some Muslims are they are still susceptible to Islamic extremism. At one point in episode four the Harcourt even suspect this themselves – whilst at a multicultural school fête at their son’s primary school Mona even speculates as to whether he will one day be converted to radical Islam. This should be noted, especially in the light of the current murder trial of Darren Osborne who drove a van into a London mosque. Osborne claimed to be influenced by the television drama Three Girls, which centred around grooming of teenage girls by Muslims men.
The drama raises issues about the nature of both the Pakistani state and so-called ‘radical Islam’. Pakistan was created out of the western and mostly Muslim area of British India after independence in 1947. For decades it has been a bastion of Wahhabism, a particularly reactionary form of Sunni Islam, which originated in Saudi Arabia. During the 1980s Pakistan was a base for a US-backed terror campaign against the people’s democracy in Afghanistan. In recent years Islamist terror was used to overthrow the progressive Libyan government and it is also being used against the National Progressive Front government in Syria. In other words, this malignant ideology is more likely to be used by imperialism than against it.
Pakistan has become a holding area for these Islamic terrorists; from time to time their real masters in Washington and Riyadh lose control of them and have to rein them in.
Even this, however, enables radical Islamism to play a dual role. On the one hand providing military backup for imperialism in the Middle East and on the other, at the same time fuelling Islamophobia in the west. A useful way of distracting the working class from our real enemies – the ruling class and its programmes of austerity. I am sure Teresa May and Boris Johnson would love to see us fighting amongst ourselves whilst they take away the gains we have made since the Second World War.
In one scene set in a mosque a preacher talks of “our brothers and sisters being killed by Yankee bombs in Aleppo.” I am not one to defend US imperialism but the Islamist terrorists in Aleppo were not defeated by the USA but by the Syrian Arab Army, Russian air power, and Palestinian, Iranian and Lebanese volunteers. Just because a programme is not a documentary does not give it an excuse to totally ignore facts. Although I suspect this is a deliberate mistake.
I have never told readers of my reviews not to watch any television programme or film; in this case I will just remind you that Silent Witness is on BBC1 at the same time.
Posted by london communists at 9:16 AM