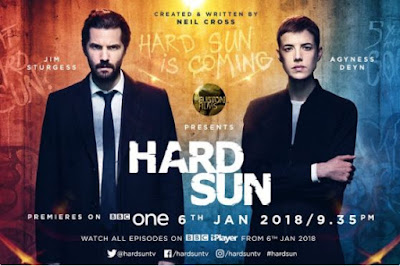 THIS SCI-FI thriller is now into its fourth episode out of six and is shown on BBC1 on Saturday evenings.  Episode One sets the scene for the overall plot very well.  Essentially a secret file is uncovered which foretells some kind of Extinction Level Event; but the drama leaves what it actually is to the viewers’ imagination.  The state attempts a major cover-up which almost resulted in a murder. The dossier is then released to the media but the state simply claims the story to be nonsense, the work of conspiracy theorists and nutters.  For a while calm prevails.
The drama contains a number of sub-plots, with the two main characters, both detectives, being blackmailed into discrediting each other.  Surprisingly their working relationship and personal lives contain a number of serious issues.
Central to the plot is the role of the secret, or not so secret, state. It raises a number of issues, such as the use of torture and the public’s right to know. The problem I have with such dramas is they only tell us part of the story. They remind us that there is a secret state, which almost certainly exists outside of the law. But they seldom bother to explain which class interests it actually serves. It is often said a little knowledge is a bad thing.
In her blog the Scottish crime writer Val McDermid claims that Crime Fiction is more likely to be left-wing and thrillers right-wing.  Although there are many exceptions to this rule and Ms McDermid’s definition of left-wing might be a bit different from that of this paper but in the case of Hard Sun  she may have a point.
Hard Sun initially has the appearance, shall we say, of left-liberal television drama, which raises the threat of an unaccountable, secret state at risk of getting out of control.  In fact its message is somewhat the reverse. It raises the dangers of the ignorant masses knowing too much. This is shown by the serial killer, who, on hearing about the Hard Sun file, goes on a killing spree across London and sparks a number of copycat killings.
According to Val’s argument, reactionaries use the genre of the thriller to expose the dangers of disturbance to the status quo and a happy ending is when it is restored.
This can be seen in Hard Sun with a scene set in a London barber’s shop. A group of men are having an everyday conversation, which is disturbed by a maniac setting fire to a row of parked cars. The shop owner tries to stop him and is burnt alive. This is how the right see themselves, as defending the normal day-to-day running of society and as protectors of the innocent masses, often from themselves. We know better.
The issue of whether or not the public have the right to know comes in the light of the various Wikileaks and other whistle blowers who have emerged in recent years. The likes of Julian Assange, Edward Snowden and Chelsea Manning have exposed many of the actions and crimes of US imperialism. This malignant force should not only be exposed but can and hopefully will be defeated.
The Hard Sun drama uses the example of some kind of impending cosmic disaster over which we have no control as justification for keeping the ignorant masses in the dark. In reality our Sun will one day become extinct and no longer able to support life on Earth. But this will not occur for many millions, if not billions of years. The narrative put forward in the drama is that it is better we are kept in the dark about certain things, as knowledge of them will unleash chaos.
Hard Sun shows the everyday world being disrupted and although having not seen the rest of the drama, I would not be surprised that there will be a happy ending when the status quo is restored. Maybe there is some truth in Val McDermid’s thesis.
Posted by london communists at 10:44 AM