The Life of Spies 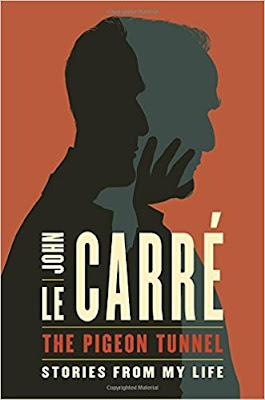 THIS BOOK marks John le Carré’s, the well-known writer of spy thrillers, first venture into non-fiction. It is not so much an autobiography as a rich collection of autobiographical anecdotes and is mostly about the people he has met and spoken in his career as a writer researching characters for his books, and later the film directors and stars who brought his creations to the cinema and television series. His real name is David Cornwell.
We get personal encounters with Yasser Arafat, Palestinian freedom fighters, Andrei Sakharov, Richard Burton, Alec Guinness and many others. We learn about Oleg Penkovsky’s interesting medical condition and about how in 1951 West German Chancellor Konrad Adenauer’s chief of security managed to pass a law ensuring that civil servants from the Nazi era were recompensed with pay, back pay, pension rights and promotions that they would have had if the Second World War had not taken place or if Germany had won it. The result was that “The old Nazi guard clung to the plum jobs. A younger, less tarnished generation was consigned to life below stairs.”
Le Carré’s diligent researches led him to create well rounded, three-dimensional characters in contrast with the shallow sex-and-violence-obsessed creations of some other spy thrillers. But he went out ‘into the field’ to do his research with characters already in mind and saw the people he met through the prisms of those characters – not totally open mindedly.
It is only at the end of the book that we get an insight into his childhood and relationship with his father – a well-heeled wheeler dealer and con-man who served more than one sentence for fraud – a gambler who could charm money out of people who would still say what a wonderful bloke he was after they had been robbed, but who would leave his family desperately trying to fend off creditors.
Le Carré claims it was his father who first taught him how to lie well – how to charm strangers into parting with money and state secrets – a transferable skill vital to spies and writers of fiction alike. Le Carré claims that his own experience as a spy was superficial dabbling of no significance.
He has a jaundiced but affectionate view of the espionage community both East and West, and makes it clear that the skills and culture of spies are not those of model citizens. That world has undergone huge changes since the revelations of Wikileaks through Chelsea Manning and those of Edward Snowden, leaving the plots of Le Carré and other spy thriller writers looking a lot less astounding and dramatic than real life.
Now in his mid-80s, Le Carré warns that his memories may not be perfect and the book is mostly about the people he has met rather than himself, but we do catch a mirror image of an amiable, confident, well-off world traveller who is still very careful not to say too much.
The title The Pigeon Tunnel is taken from a facility provided by a sports club next to the main casino in Monté Carlo: a stretch of lawn and a shooting range looking out to sea. Under the lawn were two wide tunnels connected to a pigeon loft. Pigeons were put into the tunnels to stumble and flutter their way to the light at the end of the tunnels where they would emerge over the Mediterranean sky as sporting gentlemen were ready to blast them with shot guns.
Surviving pigeons would return to the top of the casino and their place of birth, where they would be trapped to send on the same perilous journey again – because being homing pigeons they did not know what else to do. Le Carré likens this to the culture of spies.
Posted by london communists at 1:49 PM