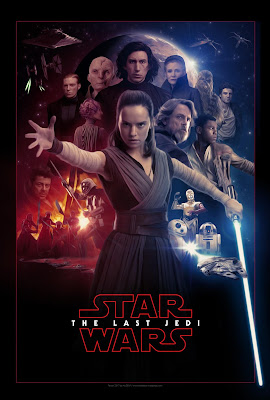 The film is episode eight of the Star Wars series. Episode six, The Empire Strikes Back, saw the Evil Empire of Darth Vader and Emperor Palpatine defeated by the rebel alliance. In episode seven, The Force Awakens, we see the Empire reconstituted in the form of the First Order. We also see Kylo Ren, the son of Han Solo and Leia Organa, turn to the Dark Side; meanwhile the rebels return to being rebels, an inter-galactic example of permanent revolution perhaps.
The Last Jedi shows a mixture of good cinematic effects, which perhaps can only be appreciated on the big screen, a complex story and an array of new characters.  There is discussion in the film about the past mistakes of the Jedi Order; an order that bares many similarities to the Warrior Monks of the Middle Ages.
The new characters emanate the middle and lower ranks of the resistance, and have a tendency to disobey orders and act independently; after all they are rebels. There is one section of the film where a rebel duo visit a planet inhabited by the super-rich, dominated by a mega casino and private security guards. It is later explained that these people obtained their wealth by selling weapons to both sides in the conflict; a possible attack on the arms trade? Must I not remind readers that good science fiction is as much about the present as about any imagined future.
The use of CGI (computer-generated imagery) enabled the film-makers to use the late Carrie Fisher to continue to play General Leia. Some may argue about the efficacy of this – are there not better ways to honour the memory of someone who may have led a somewhat tragic life but was still an outstanding actress? It also poses the question that if the recently deceased can be reused in films, why not bring long-dead actors back to life?
As someone who has seen every Star Wars film since 1977, it probably is worth a trip to your nearest multiplex. Which, unlike in 1977, you may now find surrounded by an array of overpriced restaurants staffed by 20-somethings on zero-hour contracts.

Posted by london communists at 2:55 PM