Jumanji: Welcome to the Jungle 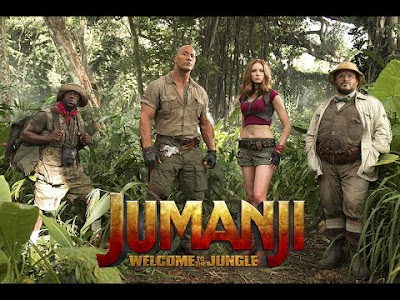 Essentially a US teen movie, set in what is commonly referred to as Middle America. The film explores issues of modern society such as over-dependence on mobile phones as well as the role of computer games. It also goes into the possibility of individuals changing personal characteristics and even taking on different personas.
At the start of the film the heroes, doing community service for breaching High School rules, become trapped in a computer game. The theme of the story is to get out of the game, Jumanji, and to do this they must succeed at all levels of the game and complete the quest.
The question I asked myself was whether elements of the film expressed America’s view of the world as a Game. Part of the game is set in a jungle – perhaps reference to Africa.  More poignantly there is a scene set in a bazaar that resembles a Middle Eastern city, Baghdad perhaps. The villains are mindless automatons, with their faces covered, a possible reference to Middle Eastern insurgents. This could be said to show how the USA views the outside world; essentially as an exotic game in some kind of separate dimension.
The idea of viewing the world as a Game is not as ridiculous as it sounds. In the 1950s at the height of the Cold War the US mathematician, John Nash, developed the concept of Game Theory. Game Theory, based around the idea of the zero-sum game, was used as a guide to US foreign policy for a number of years. Perhaps now it has descended into popular culture.
The film contains elements of Indiana Jones and Harry Potter , as well as aspects of Joseph Conrad’s Heart of Darkness. Some of the scenes resemble those from earlier films; for instance, the heroes are chased by stampeding rhinos, this very much resembles the 2005 adaptation of King Kong, also starring Jack Black, which features stampeding Brontosauruses.
Although essentially a teen film, it can be enjoyed by films lovers of all ages. As someone who has been watching films or going to the cinema for some years, I can remember when the only items on sale in the foyer were bags of sweets and, obviously, popcorn. I was about to say in my day, you went the cinema and then followed it by a visit to a nearby restaurant or pub. Now I notice film-goers entering the auditorium carrying what appears to be their dinner.
Posted by london communists at 4:51 AM