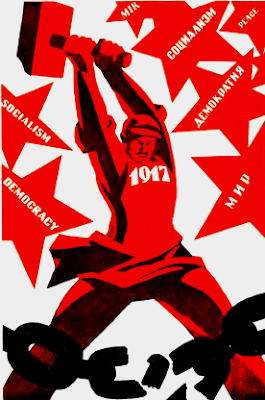 
The latest issue of the biannual Indian journal Revolutionary Democracy has arrived. As one might expect, the issue for October 2017 has plenty of material to mark the 100th anniversary of the Bolshevik revolution to supplement the usual range of materials on contemporary Indian affairs and historical materials from the Soviet archives.
This issue opens with the horrifying case of at least 21 patients at an Indian hospital dying because a commercial company cut off supplies of oxygen. The Chief Minister of Uttar Pradesh, in whose constituency the hospital lies, has denied knowing about the situation despite clear evidence of repeated warnings from doctors.
That this single example of the state of health provision in India is not an isolated one is seen in another article that takes apart the recently announced national budget. It accuses the Hindu nationalist government of dismantling India’s welfare system. Amongst other points it highlights the dire state of India’s schools, citing the fact that on an occasion when there was “deprioritisation of education” a fifth of schools have no drinking water facilities. India’s tribal peoples and ethnic minorities get an especially raw deal, a subject expanded upon in another piece about the situation of the Naga people on the border between India and Myanmar.
Two articles criticise the support given by the Indian Government to the attacks on the Rohingyas in Myanmar, which is only the most recent example of long-standing links between the ‘Hindutva’ nationalists in India and fascist Buddhist groups in Sri Lanka and Myanmar.
A lengthy review of a recent book – Chirashree Das Gupta’s {State and Capital in Independent India} –  provides a useful survey of economic development in India from 1947 until the 1980s.
Turning to the 100th Anniversary of the Great October Revolution there are two main pieces: one on the benefits for women in the Soviet Union and another on education, which deals not only with the great expansion of educational provision in the early days of the Soviet Union but also with earlier Marxist and pre-Marxist socialist education thinking.
From the Moscow archives there are hitherto untranslated materials from Stalin in his capacity as Commissar of Nationalities in late 1917. These deal with the nationalities and military problems in the Ukraine, and others assure the Muslim population of the former Russian Empire that their religion, formerly oppressed by the Tsars, would be respected. Promises were made, and speedily fulfilled, that historical relics seized by earlier Tsars, then in Moscow, would be transferred to Tashkent.
The Naxalite movement, which began 50 years ago as a result of a split with the Communist Party of India (Marxist-Leninist) [CPI (ML)], occupies several pages. Named after a West Bengal village, and taking inspiration from Mao Zedong’s experiences in China, it has waged guerrilla war allegedly on behalf of the tribal peoples of western India. An article on the history of the movement, and the conditions from which it arose, appears from a member of the CPI (ML). This is complemented by a 1970 article from a Bengali communist leader Parimal Dasgupta dealing with disputes within the rival communist parties of India, which is notably critical of the Naxalites.
Stalin makes two more appearances. The first is a 1935 interview with the French novelist Romain Rolland, which focuses on the danger of counter-revolutionaries smuggled into the country to assassinate Soviet leaders. Some internal counter-revolutionaries used children who were below the age of criminal responsibility. Another important point discussed was Stalin’s observation that at times different positions would be taken by communist parties in capitalist countries and the Soviet Union as a socialist state. This was an alive issue when the mutual assistance pact of that year between France and the USSR could put the French Communist Party in a difficult position.
The final piece from Stalin, written just weeks before his death, is a letter to a leader of the Indonesian Communist Party about strategy and tactics in a country that despite having evicted Dutch colonialism was still largely under the colonial yoke. His reflections, as editor Vijay Singh points out, have relevance for much of the  so-called ‘Third World’ today.
Whilst one might not agree with the general thrust of International Conference of Marxist Leninist Parties & Organisations (which greatly admires Enver Hoxha) there is, as always, much worthwhile reading in this issue.
Posted by london communists at 2:59 PM