Socialism is the future! 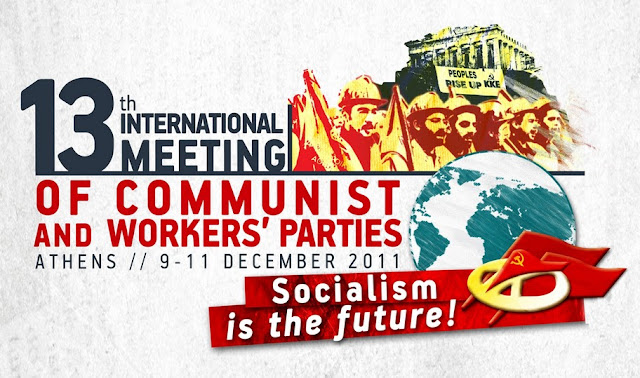 By our European Affairs correspondent

Over a hundred comrades from 78 parties, including the New Communist Party of Britain, took part in the 13th International Meeting of communist and workers’ parties in Athens last month.
Representatives came from 59 countries, including delegations from the ruling parties of Cuba, DPR Korea, Laos, Vietnam and those that participate in government like the  South African Communist Party, the two Syrian communist parties, AKEL in Cyprus and the People’s Progressive Party of Guyana.
The conference was hosted by the Communist Party of Greece (KKE) whose resistance to the bourgeois offensive sparked off the mass struggle against the austerity programme throughout Europe. At the close of the three day event delegates joined the picket line in solidarity with steelworkers who’ve been out for over six weeks striking against short time and a 40 per cent cut in wages.
The communist response to the global capitalist crisis was, naturally, a major theme in the three days of debate in the Greek capital. The communist movement also looked at rise of racism and fascism in Europe, the way US-led imperialism was exploiting the upheavals in the Arab world and imperialist aggression all over the world.
In his contribution NCP leader Andy Brooks said that: ”In Britain and throughout the rest of the European Union the labour movement has two options as its economic standards decline and its political and democratic rights are eroded.
“One option for the labour movement is to remain tied to reformist ideology and continue to give its support to right-wing social democratic leadership which co-operates with and capitulates with the demands and interests of state monopoly capitalism.
“These leaderships have no commitment to socialism, no commitment to defend the welfare state and the social wage and no commitment to renationalise the industries that have been privatised. They lead no effective fight to mobilise the people against reactionary governments. They betray, and work for the defeat of workers in struggle. They refuse to countenance any action which infringes against reactionary capitalist laws. They work to strengthen Nato and US imperialism’s military and political grip over Europe and in Britain and France the social-democratic leadership remains committed to the possession and development of vast nuclear arsenals.
“The other option is to fight to defeat the right-wing class collaborators in the unions and the social democratic movements while building the revolutionary party dedicated to the struggle that can unite and mobilise the working class behind the banner of socialism. Socialism is the only alternative that can achieve the emancipation of the working class and fulfill the people’s desire for world peace, nuclear disarmament and the elimination of the causes of war”.
In the final statement the conference strongly condemned the imperialist war of Nato and the European Union against the Libyan people and the threats and interference in the internal affairs of Syria and Iran, as well as of any other country. It considered that every foreign intervention against Iran under whatever pretext attacks the interests of the Iranian workers and their struggles for democratic freedoms, social justice and social rights.
The conference declared that only socialism can create the conditions for the eradication of wars, unemployment, hunger, misery, illiteracy, the uncertainty of hundreds of millions of people, the destruction of the environment. Only socialism creates the conditions for development according to the contemporary needs of the workers.
“Working people, farmers, urban and rural workers, women, young people, we call on you to struggle together to put an end to this capitalist barbarity. There is hope, there is a prospect. The future belongs to socialism”.

Posted by london communists at 4:18 AM