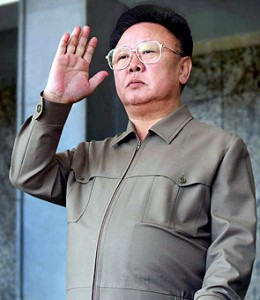 Kim Jong Il was born on 16th  February 1942 during the Korean people’s struggle against the Japanese occupation. His father was the Korean partisan leader Kim Il Sung who led the Korean communist movement to victory against Japanese colonialism and American imperialism to build the modern socialist republic that exists in the north of the divided Korean peninsula.
Kim Jong Il grew up to be a great revolutionary and wisely led the Workers Party of Korea (WPK), the army and people for a long period, performing undying revolutionary feats on behalf of the country, the people, the times and history.
In 1960, he began to study at the politics and economics department of Kim Il Sung University and graduated four years later. Kim Jong Il started working for the Central Committee of the Workers' Party of Korea in 1964. In 1973, he was elected secretary of the committee and in February the next year, member of the Political Bureau of the Central Committee. Since October 1980, Kim Jong Il has been member of the Presidium of the Politburo and secretary of the Central Committee of the WPK and member of the Central Military Commission.
From 1982 to 1998, Kim was elected deputy to every Supreme People's Assembly. From December 1992 to April 1993, he was successively Supreme Commander of the Korean People's Army, First Vice-Chairman and later Chairman of the National Defence Commission.
On  8th October 1997, Kim Jong Il was elected General Secretary of the WPK.
Kim Jong Il was given the honorary title "Hero of the Democratic People's Republic of Korea" in 1975 and 1982. In April 1992, he was given the title of Marshal of the DPRK. He has also received the Kim Il Sung Order three times and many other awards and honours.
Democratic Korean leader Kim Jong Il died following a heart attack on a train during a field inspection tour on 17th December. His passing was mourned by leaders of the people’s democracies, the Third World and throughout the  world communist movement while millions of Koreans attended the 25 mile, three hour funeral procession in Pyongyang on 28th December.
At the United Nations Headquarters in New York the UN’s blue and white flag flew at half mast last week to mourn the death of Kim Jong Il and a minute’s silence was observed at the UN General Assembly in respect of the Democratic Korean leader. The Cuban government decreed three days of mourning  during which all Cuban flags were  flown at half staff at public buildings and military installations.
In Britain NCP leader Andy Brooks, together with Michael Chant and Chris Coleman of the RCPB (ML), went to the DPR Korea embassy in London to sign the book of condolences and pay their last respects to the great Korean communist leader.

NCP, RCPB (ML) and Juche Study group
Posted by london communists at 4:24 AM