A review by Ben Soton 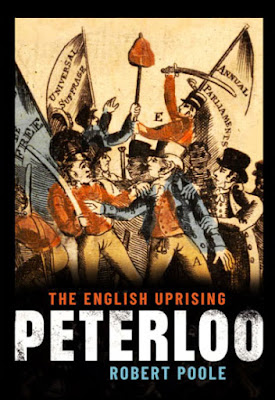 I was once told to read the book then see the film.  In this case I would be forgiven as the film Peterloo was released in 2018.  The book is a study of the period and gives an insight into the events resulting in the Peterloo Massacre.
The 1810s, or late Regency England coincided with Jane Austen’s Pride and Prejudice.  Instead of women getting engaged to some posh bloke in tight trousers it was the time of the dark satanic mills of the Industrial Revolution.  According to Poole this era marks the end of the Long Eighteenth Century (1688 – 1832) in British history – a period beginning with William of Orange’s Glorious Revolution and ending with the Great Reform Bill.
The Massacre took place in Manchester where the contradictions of this period were sharpest.  Manchester was an area of the expanding cotton industry, making it one of the most developed places in Britain if not the world.  Meanwhile administratively it had changed little for centuries.  Manchester was run by a clique of high-Tory landowners and clergy who lived outside the township.  These issues combined with economic hardship and even a period of bad weather created a perfect storm that led to the Peterloo Massacre.
There are many histories about the good guys – Levellers, Chartists, Suffragettes and Communists.  Poole rightly gives coverage to the other side.  He discusses the political trend known as Loyalism; the idea of subjects actively supporting the Establishment.  Meanwhile there were occasions when Tory magistrates intervened to stabilise bread prices; Loyalism is paid for with Paternalism – think government handouts near election time.  It was also the ideological basis for the network of spies that reported back to the Home Secretary Lord Sidmouth.  Loyalism is the foundation of far-right and fascist movements to this day; a few years ago, the English Defence League threatened to attack public sector strikers.
Poole goes into considerable details about the opposition movements of the day.  He discusses their tactics, political theories and key figures.  The tactic of printing multiple petitions and distributing them across the country is still used by left-wing activists today.  The idea was developed by William Cartwright (1760-1824).  He also championed the idea of the franchise being extended to all tax payers; rather than just men of property.  As most goods were taxed this would have effectively meant universal suffrage; whilst property qualifications existed until the early 20th century.
The book would be incomplete without an account of the massacre in which 15 people were killed and hundreds more injured when armed cavalry attacked a pro-democracy rally in the heart of Manchester, Poole uses a range of eye witness accounts and newspaper reports to describe the events of the day.  The attacking Yeomanry would later parade the reformers’ banners as trophies in the same way a victorious army would display enemy colours.
The actual events of the massacre are best shown through the medium of film.  However, the book provides you with an insight into the background to the events and politics of the day making it a good companion to the film.  Although not possible in this case I now know why you should read the book first.
Posted by london communists at 9:12 AM