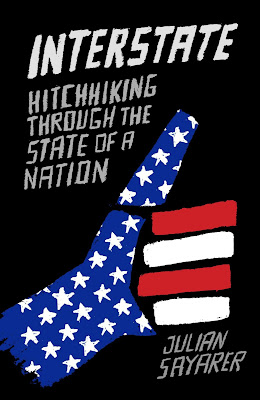 Julian Sayarer might be called by some a modern day adventurer having cycled across quite a lot of the world. In this book he writes about a hitchhiking trip across the USA from New York to San Francisco.
Sayarer makes no attempt at a dispassionate, sociological account. He tells it like he sees it and how he feels it and he does so from a position well left of centre. Annoyingly he blurs the perspective a little by not using his name for the narrator. However, his “Emre” is the same age as Julian and has also been brought up in London from a Turkish background.
He inevitably meets all kinds of people, red-necks, anarchists, gays, immigrants, white collar and blue collar workers, rich and poor. You feel it’s the immigrants he has the most sympathy with, perhaps because of his background but also because they can be less to blame for the state of the nation as he finds it.
At times he is ferocious in response to what he finds: “For the first time but not the last … I [feel] that I have nothing in common with these people. Here there is no public, no humanity, nothing to connect us. I’m somehow coming to understand killers, that sustainable feed of Americans willing to act on the feelings now rising in me, the whole country defending the right of those people to own the implement of murder that allows them to fulfil a cold, numb, destruction of others.”
Sayarer is understandably saddened by the fear Americans show of their fellow citizens but given the circumstances it is hardly surprising. He tells us: “Meat, Petrol and Guns are the rights Americans are now given … in exchange for all that might once have constituted freedom. The occasional mass shooting by a snapping sociopath … a man altogether haywire and yet more sane than any European would dare to believe … is only the cost of the American Way.”
He meets Americans who have a clear view of their society and are just doing the best they can to get by – they see no real alternative on the horizon. He despairs of the poorest he sees around Greyhound bus stations, “… poor fuckers … they won’t be helping themselves anytime soon”, he comments.
There are lighter episodes in this book and the friendship he strikes up with a Punjabi truck driver is warm but economic realities are never far away.
But perhaps over all Sayarer’s picture is too dark. After all Lenin tells us that for revolutions to take place the situation must be severe – both the ruling class and the oppressed class must not be able to carry on in old way.
I have some niggles with the style of this book but nevertheless it is well worth the read. Check your local library.

Posted by london communists at 9:16 AM