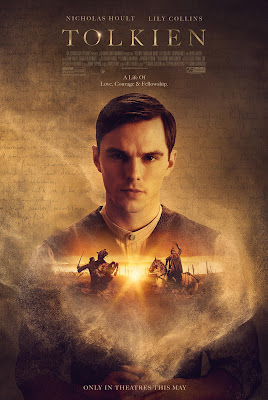 A young boy, due to a loss of income, is forced to move from the English countryside to industrial Birmingham. Later on, a group of teenage boys are ejected from a tea room for chatting up a waitress. These scenes are interlaced with images from the First World War. It seems like Christopher Robin meets Peaky Blinders mixed with Inbetweeners and Blackadder Goes Forth.
This is a film about the life of John Ronald Reuel Tolkien, played by Nicholas Hoult.  Tolkien was an academic authority on Old English and Old Norse literature, but he is best known as author of the Hobbit, Lord of the Rings and the Silmarillion.
The film revolves around the influences in Tolkien’s early life that inspired his novels.  These included the friendships he developed during his schooldays, the horrors of the First World War and his interest in nature. In the scenes from the First World War he is aided by a Baldrick-like soldier of short stature; perhaps the influence behind the Hobbits. In his childhood he is guided by a Catholic priest, Father Francis Morgan played by Colm Meaney; perhaps an inspiration for Gandalf. The film allows the viewer to make up their own mind.
Tolkien also created his own language, Elvish, which was influenced by a number of Northern European languages. The film features Derek Jacobi as Professor Joseph Wright, a linguistics expert who influenced Tolkien. Wright talks about how languages bond peoples together and give a common heritage; this sounds fine but such ideas are a major element of conservative and even fascist ideology. It is worth reminding readers that Tolkien, a staunch Roman Catholic, was a fervent supporter of General Franco in the Spanish Civil War although he did stop short of supporting Hitler.
Although Tolkien publicly rejected any analogies to contemporary events, it has been claimed that the villain Suaron was based on Joseph Stalin. Successful fantasy however, has to have a relationship to the present or the past. The Lord of the Rings and Hobbit} stories feature various groups of fictional beings.
The Hobbits resemble rural villagers and their home, The Shire, seems to resemble the English countryside. The dwarves appear more like an industrial proletariat, possibly from the Celtic fringe. The Elves, with their intellectual superiority and faster reflexes, are an elite charged with stewardship over the rest of the fictional Middle Earth. Evil in this world seems to come from some kind of force upsetting a delicate balance. An essentially conservative world view.
Fantasy often romanticises the past. To an extent the film does this with the Edwardian era, where much of the film is set. We are shown elaborately decorated tea rooms, the romance between Tolkien and his future wife Edith Bratt, played by Lilly Collins, and the friendships between Tolkien and a group of fellow students. This period is often described as the ‘Belle Epoch’ or the ‘Indian Summer’, a period spoilt by the outbreak of war in 1914. If you are a fan of Tolkien the film is worth seeing because it gives an insight into the ideas behind stories that, whatever the shortcomings of the author, have stood the test of time.
Posted by london communists at 8:35 AM