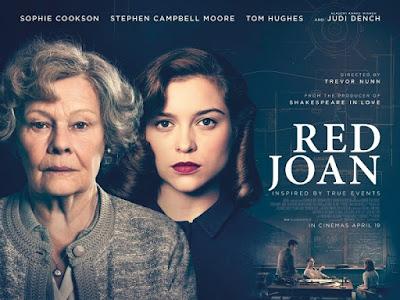 This is a relatively short film (105 minutes) based on the life of Melita Norwood, a lifelong communist who worked for the British Non-Ferrous Metals Research Association. In a recognisable 1999 an elderly woman is arrested by Special Branch on charges of providing atomic secrets to the Soviet Union. The film takes us back to the 1930s and ‘40s; where the main character, Joan Stanley played by Sophie Cookson (Kingsman the Secret Service, Kingsman the Golden Circle), is initially a student and later a research scientist.
The era is well represented. In an early scene a young Joan is invited to a Socialist film club viewing of Battleship Potemkin. Prior to the screening students sing the Red Flag; this is meant to represent her moment of conversion.
The film also shows the archaic attitude towards women during the period; it is assumed that Stanley is little more than a glorified housemaid, rather than a trained scientist. In one scene a young police constable is too embarrassed to look inside a box of feminine hygiene products when trying to locate a major security breach. It is, however, believed that these attitudes enabled Norwood to evade security successfully.
Back in 1999 a much older Stanley is berated by her son about loyalty to her country. This takes us to what the Marxist historian Eric Hobsbawm referred to as International Civil War, where during the period from the Russian Revolution onwards a struggle existed that superseded the nation state on both sides. According to Hobsbawm this struggle takes place between Nation States but also within them. In this conflict individuals on both sides could be said to have betrayed their country; the question being was it their country anyway. From 1917 reactionaries in the Soviet Union were willing to side with fascist or imperialist powers in order to have the country they had had taken away from them returned to them. Arguably communists in the west were willing to work the Soviet Union, both covertly and overtly, in to order to make the country they live in theirs.
Although the film contains a number of negative references to the Moscow Trials, it is not unsympathetic to Norwood’s actions. It should be pointed out that in a number of areas, such as jet and space technology, the Soviet Union was ahead of the imperialist powers. Parity in nuclear technology however, may have created a balance that actually prevented an unwinnable war that would probably have destroyed the planet.
It is for this reason we owe strugglers for peace such as Guy Burgess, Donald Maclean, Kim Philby and Melita Norwood a great debt.
Posted by london communists at 6:34 AM