Not wanted in Exeter! 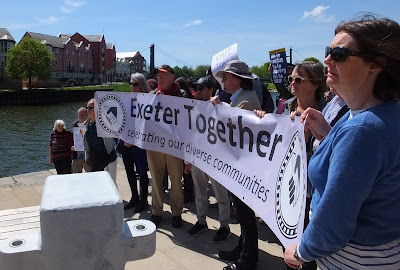 UKIP campaigners got a warm welcome from local anti-fascists when they tried to peddle their racist filth in Exeter this week. Carl Benjamin, who is standing for the Kippers in the European elections, was in town canvassing in the European elections with another former Trump supporter, the equally obnoxious Milo Yiannopoulos.
Yiannopoulos used to work for the American far-right Breitbart news network and  Benjamin has a YouTube following under the name of ‘Sargon of Akkad’. Both men are well-known for offensive remarks that have won them some notoriety amongst the mainly American racist ‘alt-right’ community.
On the day, demonstrators gathered for a picket called by Exeter’s Stand Up to Racism branch. Calling Benjamin a “racist, misogynist, rape apologist” they organised a counter-protest that was well attended considering the fact that the Kippers chose to hold their rally on the Quay, well away from the heart of town. Showing further cowardice, they also chose a time in the middle of a work day, meaning that many of the people who would have attended the counter-protest were at work. Nevertheless, we made sure our voices were heard and our presence felt!
Posted by london communists at 3:29 AM