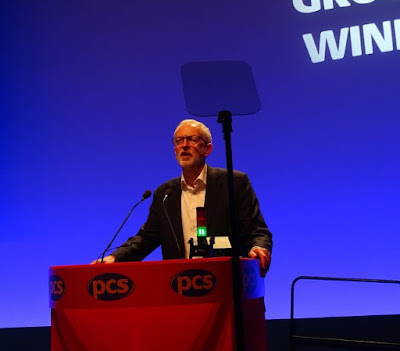 JEREMY CORBYN got a rapturous welcome from PCS delegates last week. The Labour leader ticked all the boxes during his address on the last day of the civil service workers’ annual conference in Brighton last week.
“The success of a future Labour government will depend on the trade union movement,” Corbyn said. “When Labour comes to power, you come to power too. These changes are not possible without you.
“Together we will create a social security system that is about support not sanctions, tackle the climate emergency and smash racism.”
He slammed the “ugly face of Tory austerity Britain” and vowed that the next Labour government would repeal all the oppressive Tory union laws, restore free collective bargaining and facility time for trade union activities, and introduce online balloting for strike votes and union elections.
Conference agreed to continue its national pay campaign despite an earlier strike ballot that failed to pass the 50 per cent turnout threshold that is now a legal requirement for strike action. Members voted by four to one in favour of strike action or “action short of a strike”. But turnout was 47.7 per cent and a further 3,000 votes would have been required to pass the threshold, introduced via the Trade Union Act 2016.
The National Executive Committee (NEC) remains in the hands of the major left factions that have dominated the union for years but the Socialist Party (SP), the main successor to the old Militant Tendency, was shaken by the surprise victory of John Moloney, a supporter of the maverick Trotskyist Alliance for Workers Liberty (AWL) faction, in the race for assistant general secretary, defeating the long-standing SP incumbent and a full-time union officer who was Mark Serwotka’s choice.
Earlier Serwotka seemingly discounted rumours of early retirement by confirming that he would run again when the general secretary elections come round in the autumn.
Posted by london communists at 4:18 AM