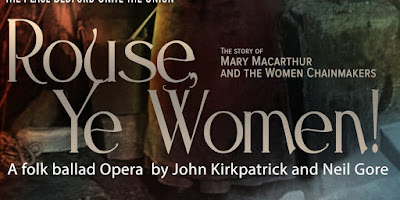 A play by Townsend Productions is just starting out on a national tour and tells the true story of the women chain makers of Cradley Heath, Birmingham, who went on strike in 1910 in a fight to end low pay and establish a minimum wage. They were victorious after a long struggle against the chain manufacturers who sub-contracted work out to agents known as ‘foggers’.
These foggers supplied the iron rods, and would take a cut of 25 per cent from the women chain makers who were working 12–13 hours per day hammering up to 5,000 links per week for a pittance whilst also having the burden of domestic chores and childcare. The women had originally worked in isolation from each other but trades union activism brought them together through Mary Macarthur, suffragist and general secretary of the Women’s Trade Union League.
Macarthur exposed the terrible conditions of the ‘sweated labour’ and the National Anti-Sweating League was formed. Her activism in the National Federation of Women Workers (NFWW) helped to pressurise the Liberal government into passing the Trades Boards Act to set minimum rates in four low=paid trades. Many employers signed up to the white list of those paying the new rates but some resisted, which led to the Cradley Heath lockout lasting for nine weeks before the rebellious employers caved in. The women’s new rates were double the old rates.
This play provides the message that individually workers are vulnerable to exploitation, but together and with a determined leadership they can be powerful enough to take on the bosses and win. The accompanying songs are rousing and in keeping with their previous productions; the excellent cast encourage the audience to join in with the singing and red flag waving.
“Workers of the world unite, you have nothing to lose but your chains” seems an appropriate slogan here.
Posted by london communists at 4:50 AM