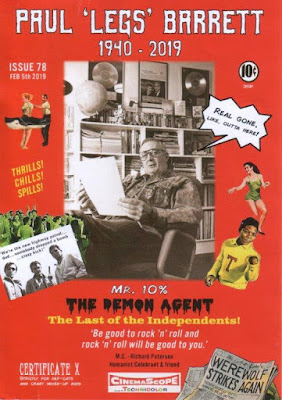 Comrades joined relatives and friends at the Thornhill Cemetery in Cardiff last week to pay their last respects to Paul Barrett.
New Communist Party National Chair Alex Kempshall and Communist Party of Britain General Secretary Rob Griffiths joined hundreds of others to celebrate the life of a communist who was also a rock’n’roll legend, and whose fame went far beyond his Welsh homeland.
Paul was an old guard communist, listed as “Paul Frank Stalin Barrett” in the International Who’s Who of Popular Music, who was well-known throughout the labour movement in south Wales.
Paul “Legs” Barrett was an agent and promoter of 1950s style Rock and Roll artistes, best known as the discoverer and mentor of Shakin’ Stevens during the 1960s and ‘70s. He was also a singer in his own right during a long career in the music industry that began when he was a teenager at the dawn of rock’n’roll in the early 1950s.
Paul was also an active communist who followed the footsteps of his father, who had joined the International Brigade to fight fascism in Spain in the 1930s. Paul was the face of the New Communist Party in south Wales and a member of the Central Committee of the Party until his retirement some years ago. He gave talks on popular music at Party schools and produced Rock the Institution – a New Worker fundraising CD of songs by the bands he handled – that was released in 1998.
Paul Barrett never wavered in his belief in the fundamental truths of Marxism-Leninism. His immense contribution to popular music and the communist movement will be remembered for many years to come.
His funeral was opened by the playing of the Woody Guthrie version of Jarama Valley, which was a favourite of Paul’s because of his father’s participation in the Spanish anti-fascist war. It closed, naturally, with the Internationale.
Posted by london communists at 3:50 PM