A Radical History of the World? 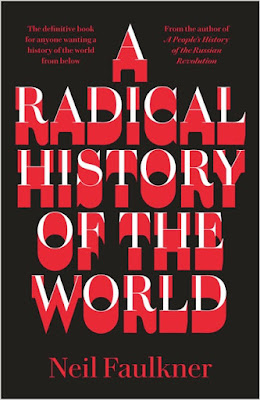 Neil Faulkner’s latest work is the second edition of a 2013 publication A Marxist History of the World – Neanderthals to Neo-Liberals. Before you head to Waterstones or log to Amazon however – buyer beware. The author is former member of the Socialist Workers Party (SWP) and now involved in Momentum. The SWP and its Third Camp Trotskyism are the safe radicalism of Radio Four panel games and sections of academia. With this in mind, the SWP finds itself on the same side as the British state in conflicts such as Ukraine and Syria. During the counter-revolutions of 1989 they were happy to act as cheer-leaders to imperialism.
The book is best viewed in two parts. The first 12 chapters cover human history from the time of hunter-gathers, through the establishment of class society with the agricultural revolution. It covers the empires of the ancient world, feudalism and the development of capitalism.
Faulkner’s work is one of many books attempting to summarise the entirety of human history in one volume. Others include Andrew Marr’s A History of the World, A Little History of the World by EH Gombrich and the more light-hearted Horrible History of The World by Terry Deary.
This poses several questions; can all of human history be summarised in one volume? Equally these works contain little or no primary research and, although not actually plagiarism, are they not simply amalgams of other historians’ works?
At the same time they can give the reader an overview of history, encouraging them to undertake further reading.
Faulkner cites the works of Marxist historians such as Maurice Dobb, Christopher Hill and Eric Hobsbawn and numerous other historians, but he also draws heavily on the works of the SWP guru Tony Cliff.
Third Camp Trotskyism inevitable shows its head in the later chapters of this book. According to Faulkner the Russian Revolution was betrayed by Joseph Stalin in the 1920s and a system of ‘State Capitalism’ was established. One has to ask the question, if capitalism was restored in the 1920s then what happened in 1991?
Secondly, in an earlier chapter he explains the meaning of capitalism – a system nothing like the former Soviet Union.
Finally, I can remember the counter-revolutions of 1989–91, not with any great pleasure I should point out. These events saw relatively equal societies replaced by highly unequal ones. I can remember, at best misguided (namely guided by imperialism), individuals breaking into the homes of Communist Party leaders expecting to find Babylonian luxury; instead finding somewhat dull looking furnishings.
The author predictably compares the Soviet Union to Nazi Germany and the Japanese Empire. He rightly describes the Second World War, with all its horrors, as a tragedy – but the Second World War resulted in the defeat of fascism, with the Soviet Union contributing the lion’s share. It also led to the end of European colonial empires; Britain and France being the largest. Specifically, it led to a shift in the global balance of class forces in favour of the working class. This could be seen by the creation of a socialist camp, stronger communist parties and the growth of national liberation movements. In Britain it led to the establishment of the NHS and the ‘welfare state’, powerful trade unions and the use of Keynesian economics, which prioritised the alleviation of poverty. It is these gains that successive neo-liberal governments have been undermining since the late 1970s.
The book takes us up to the financial crash of 2008, the austerity regime and the subsequent resistance. Faulkner concludes with a call to arms against global capitalism and its inherent side effects: climate change, war, global poverty and inequality. We would all agree with this but can a movement with such a distorted view of the 20th century play a positive role in the 21st?

Posted by london communists at 4:18 PM