Knight of the Secret Police 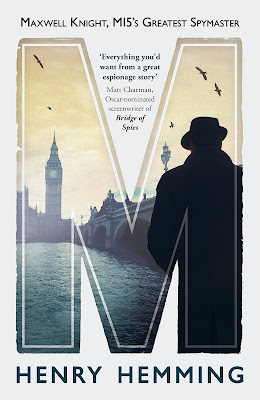 Older readers might be familiar with Charles Henry Maxwell Knight (1900–1968) in his capacity as a popular television natural history presenter and author of such books as Tortoises and How to Keep Them. This not, however, the main reason for him earning a biography worth reviewing in these pages.
In this biography Hemming argues that Knight’s life-long interest in keeping all sorts of animals made him an ideal spymaster in that the patient observation of animals helped to make him an ideal observer of the human species.
By any standards Knight was a strange character. After leaving the Navy at the end of the First World War he took up jazz, much to the displeasure of this family. Bored with a lowly civil service job his spying career began under the auspices of Sir George Makgill, who ran a private intelligence service that sold information to industrialists worried about communists and trade unionists. Makgill cast his net widely; he sent Knight into the British Fascisti in 1923 where he was told to observe and obtain information, but not disrupt the organisation to which both Makgill and Knight would feel at home. One of his tasks was to kidnap the future Communist Party of Great Britain (CPGB) General Secretary Harry Pollitt at Liverpool in 1925. His career with Makgill was an apprenticeship for a career in the official intelligence services.
Throughout his career, anti-communism came first for Knight. In the British Fascisti he met William Joyce, the future Lord Haw Haw, whom he later tipped off when he was threatened with arrest, allowing him to flee to Germany.
Knight could be described as an anti-fascist fascist in that he only saw the British Union of Fascists (BUF) as a threat to the British Empire when he finally and reluctantly accepted that the BUF was dependent on Mussolini.
In 1940 he played a leading role in the discovery and arrest of a clerk at the US Embassy who was planning to send secret correspondence between Churchill and Roosevelt to the Germans through a Russian émigré associated with right-wing Tories.
For New Worker readers the most interesting parts will be those relating to spies within the CPGB, some of whom are identified for the first time. Hemming has done this by referring to their initials and addresses in the files, and type of information they were supplying. So far as I am aware, none of these identifications have been challenged since the book’s first publication nearly two years ago.
Using declassified MI5 files, Hemming claims to have identified one as Graham Pollard, an antiquarian bookseller and historian of the book trade who held membership card No One of the Young Communist League (YCL) and who edited the party’s magazine for shop workers: The Distributive Worker. At the time Pollard was briefly married to Kay Beauchamp, who was for a time the theoretical owner of the Daily Worker and later the party’s international secretary. At least in those days the British ruling class had standards and ensured that a spy had the decency to marry his target.
Knight could be held up as a pioneer of feminism of a certain sort. Despite opposition from his seniors he was very keen on using women agents. In particular, female typists and secretaries were important sources of information. As a result of placing a respectable middle class woman, Olga Gray, in the Friends of the Soviet Union, she was able to secure a job as Secretary to CPGB General Secretary Harry Pollitt because of her efficiency, which was in short supply. From this position she was able to keep her handlers informed about party work and contacts until the strain of leading a double life led to a nervous breakdown. Microphones at the King Street offices later replaced her.
Hemming is no lefty, he applauds Knight’s cunning and thinks he was correct in targeting the CPGB on account of its Soviet links. Entertainingly written, and well indexed for later reference, this book need not be too depressing – the fact that the treasurer of the Bolshevik party was a Czarist spy did not prevent the storming of the Winter Palace.
Younger readers who, after the revolution, will be responsible for running spies into counter-revolutionary organisations should read this book for useful tips on running and handling spies.
Posted by london communists at 4:30 PM