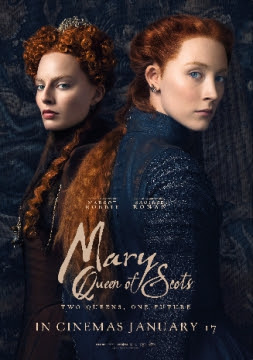 There are two occasions in this country’s past when I would have happily banged on the door of an army recruitment office. One is the Second World War against fascism; the other is 1588 when England was threatened by the Spanish Armada. The decision by Philip of Spain to launch the Armada was a result of the failure of English Catholics to replace Elizabeth I with her Catholic cousin, Mary Queen of Scots.
In the 16th century Protestantism was a focal point for progressive social forces, namely the emerging bourgeoisie; whilst Catholicism was the religion of the old feudal order. Although the Catholic Mary and Protestant Elizabeth were both essentially absolute monarchs, Elizabeth had the backing of England’s emerging bourgeoisie who in the next century would no longer have need of the monarchy. The victory of Mary Queen of Scots would have put a break on this sequence of events.
The film itself has a strong feminist slant, which reduces the quarrel between the two monarchs, played by Saoirse Ronan as Mary and Margot Robbie as Elizabeth, to one of two women who would have got on fine had it not been for the men around them. In Elizabeth’s case it’s William Cecil, played by Guy Pearce, who started his acting career in the Australian soap opera Neighbours. In Mary’s it’s her half-brother James Stewart, played by James McArdle. Meanwhile John Knox, the Scottish Protestant leader, played by David Tennant, incites religious fervour against Mary.
It is highly unlikely however, that these two queens would have viewed events this way. Feminism is an ideology that originated much later, in the 19th century, and it would have had little or no resonance in a period dominated by religion and where everyone’s position was attributed to the “natural order” of things.
The film contains a number of obvious historical inaccuracies. Towards the end of the film we see Elizabeth signing Mary’s death warrant in front of a group of courtiers. Elizabeth was in fact highly reluctant to sign her cousin’s death warrant. It had to be surreptitiously given to her amongst a number of other documents and the courtier who handed her the document was briefly imprisoned in the Tower of London.
Although Mary spent 18 years of her life in exile in England under the protection of Elizabeth, much of the film concentrates on the period between her return to Scotland after her marriage to the heir to the French throne and her exile in England.
With this in mind it is widely believed that Mary would have spoken in a French accent whereas Saoirse Ronan, who is Irish, plays her with a Scottish one.
The film places some emphasis on Elizabeth’s relationship with Robert Dudley, Earl of Leicester. Elizabeth and Dudley knew each other from when they were children. Whether their relationship ever became physical can only be supposition, although this artistic licence is always an acceptable difference between a feature film and a documentary.
Interlaced with battle and stand-offs between leading characters are shots of Scotland’s mountainous and rugged scenery. This is intended to show the brutality of political and religious conflict of the time. It would have been better however, if the film had attempted to give a better insight into the conflict than a disagreement between two women that ended in tragedy. `The conflict between the two women was part of a broader Europe-wide power struggle that eventually plunged the continent into the sectarian horrors of the Thirty Years’ War as well as the beginnings of the social conflict that would engulf the British Isles in the 17th century.
Posted by london communists at 3:38 AM