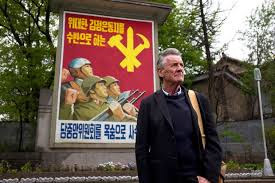 ‘Eerie’ music in the early morning over the capital, Pyongyang. Not a good start for an attempt to depict the true Democratic People’s Republic of Korea (DPRK) I thought, as I had stayed in the same fine hotel as Palin some years before and I had not heard it.
“Do you think they put in the music afterwards?” asked my mother-in-law.  Probably not I thought, that seemed a bit too blatant and it has been a long time since I was there.
But somehow that incident seemed to set the scene – as perhaps it was meant to. What we saw could hardly be faulted: modern Pyongyang with its excellent schools, health care and leisure facilities, people enjoying themselves in their time off.
But we were kept aware of the ‘restrictions’ placed on Palin by the ‘sinister State’ behind the apparently affable guides and unseen minders. The implication being that there were all these terrible things going on behind the scenes but they were not allowed to show us them.
They could not show us them because they did not exist – whether they believed they existed is another matter. Towards the end of the second programme, Palin himself seems to have his doubts.
The DPRK is different from Britain and the West, and it may seem strange to many people here. One of Palin’s guides tried to explain the different attitude to their leaders. Our ‘leaders’ in the West are the result of the chaos and strife of capitalism, where dog eats dog and the devil take the hindmost.
Their leaders are the result of the collective struggle of a people who have thrown off imperialism and then capitalism and its drive for ever more profit. Yes, they have had immense problems and made many sacrifices, and they still have problems, but their great successes have forged a collective socialist society quite different from our own.
I don’t think Palin really understood this, which is a great pity, but if he had would the sinister powers of our society have allowed him to show it?
Posted by london communists at 4:30 AM