A Pagoda for peace in London 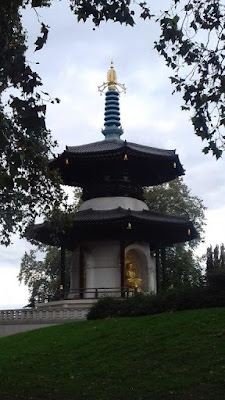 Pagodas were once the follies of the landed aristocracy of the 18th century during the craze for anything from the Far East. Nowadays these towers, also known as stupas, that were originally built to house religious relics are invariably linked with Buddhism. So it’s quite surprising to find one in plain sight in a London park.
The London Peace Pagoda in Battersea Park has been a landmark along the Thames for over 20 years. It was given to the people of London by the Japanese Nipponzan Myohoji Buddhist order as part of the old Greater London Council’s Peace Year in 1984, back in Ken Livingstone’s day.
The order’s founder, Nichidatsu Fujii, dedicated his life to peace after meeting Mahatma Gandhi in 1931. After the Second World War he called for the construction of Peace Pagodas as shrines to world peace, it was completed in 1985. Sadly Nichidatsu Fuiji died at the age of 100, just 12 weeks before the Battersea pagoda was opened.
Built in the Japanese style, the tower stands at 33.5 metres high with four large gilded bronze sculptures on each of its four sides that reflect important stages in Buddha’s life. A Buddhist monk, who lives in a storeroom converted into a temple in the park, looks after the pagoda, which is the focus for meditation and peace ceremonies throughout the year – including a prayers for peace ceremony in June and a floating lantern ceremony to mark Nagasaki day in August.
The pagoda is located within the grounds of Battersea Park on the south bank of the Thames. The park has a boating lake, all-year-round sports facilities and a small children’s zoo, as well as a licensed café for drinks and snacks. It’s is open from 8:00am until dusk and the nearest railway station is Battersea Park.
Posted by london communists at 4:22 AM