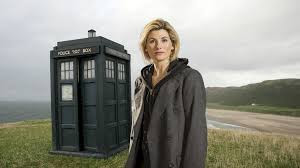 Good science fiction is not actually about the future but about the present. This is perhaps the reason for the success of Dr Who, which like much of the world was at its best in the 1960s and 1970s.
Dr Who has seen many great adventures that had a relevance to contemporary events. In the 1974 adventure, the Monster of Peladon, the good Doctor, played by John Pertwee, arrives on a planet engulfed in a miners’ strike. The 1973 series Carnival of Monsters raised contemporary fears of conspiracies within the state apparatus and also the issue of scapegoating of migrants.
The 1977 adventure, the Sun Makers, saw a workers’ revolt and ends with a representative of the old regime being thrown off a building; the building was actually a cigarette factory in Bristol. New Worker readers probably won’t have any problems with that – but the scene may have reflected reactionary fears at the time rather than a call to arms on the part of the masses.
One of the earliest Dr Who script writers was the former communist Malcom Hulke, who worked on a number of adventures including War Games, Dr Who and the Dinosaurs and The Sea Devils. The idea of soldiers being manipulated into fighting for the interests of a sinister elite group who do not have their interests at heart comes across in War Games, which consisted of 10 episodes.
In the 1980s Dr Who, along with the global situation in general, took a turn for the worse when it turned into some hybrid form of mysticism and situation comedy, and temporarily ended in 1996.
It was revived in the early 2000s, first by Christopher Ecclestone, who appeared to be the first working class Dr Who, and then by David Tennant. The revival was aided the inclusion of the working-class inner-city family based around Rose Tyler, played by Billie Piper (Secret Diary of a Call Girl, The Ruby and The Smoke, Penny Dreadful, Collateral).
The last but one incarnation, played by Peter Capaldi (The Vicar of Dibley, Judge John Deed, Foyle's War), was ruined by his assistant Clara Oswald played by Jenna Coleman (The Cry, Young Victoria, Waterloo Road, Emmerdale). Many had high hopes when Peter Capaldi took on the role but when Oswald behaved more like his carer than his assistant the series turned into nonsense, not really set anywhere – past present or future.
What of the 13th Doctor, played by Jodie Whittaker?  Firstly, I am not going into the rights and wrongs of a woman doctor, there are no wrongs of a woman playing the role.  Women have been doctors of both medicine and philosophy for a good few years, and perhaps it’s about time a woman played a time travelling one. But this is not a guarantee of success. This country has had two female Prime Ministers, both of them worthless.
Sunday night’s episode revolved around an alien villain using the Earth to gather human DNA who is thwarted by the Doctor and a number of human companions. One obvious plus is that none of them are Clara Oswald and the new Doctor is able to start from scratch with a group of new assistants. This is not a new concept. The first Doctor, William Hartnell, travelled the galaxy with his grand-daughter Susan Foreman and her two teachers.
Having a single assistant can take the focus away from the Doctor, enabling them to steal the show. With a group, the Doctor becomes the leader of a team rather than in effect solving problems alone or with only one helper, which is much less plausible. It can also enable sub-plots about the relationships between the assistants as stories develop.
Whether it will meet the original purpose of science fiction as a unique way of explaining the present is perhaps too early to say. Her assistants do appear like real characters; a teenage boy with dyspraxia, a young police officer and a middle-aged cancer survivor could be the basis for a number of good stories. Jodie Whittaker (Broadchurch, Trust Me, The Smoke) as the first female Doctor is plausible. Whilst it may be inappropriate to spend too much time discussing the different anatomy in someone who has been used to regenerating as a male for the last 900 years, she certainly has a hard role to fill.
But Whitaker is believable and like every other Doctor since 1963 will hopefully bring some of her own characterisation to the role. The success or failure of the series comes down to a number of factors; the actors, director and script writers. So far, my advice is “watch this space!”.
Posted by london communists at 6:47 AM