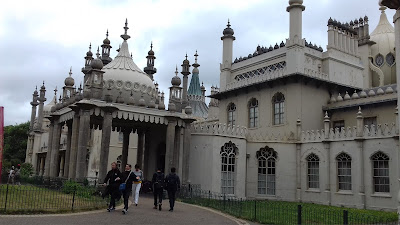 The Brighton Centre, is the largest conference venue in southern England. Open by Labour Prime Minister James Callaghan in 1977 the Centre can accommodate over five thousand delegates and it continues to host labour and trade union conferences to this day.  Sadly few stray beyond the sea-front watering holes during conference season to seek out Brighton’s past that lies only a stone’s throw away.
The Royal Pavilion marks the beginning of modern Brighton. It was built in 1787 for George, the Prince of Wales, whose patronage transformed a coastal village into a fashionable sea-side resort for a jaded aristocracy whose gambling and whoring was now confined, by the Napoleonic wars, to our shores.
The architect John Ash, who also designed Buckingham Palace and much of London’s West End, built this royal palace in the Indian ‘Moghul’ style favoured by the English nabobs of the East India Company and the feudal rajahs that were under their thumb at the time. But while the outside is all minarets and domes the inside was decorated in the equally fashionable Chinese style also favoured by those who could afford to collect Chinese works of art.
Prim Queen Victoria didn’t like it and sold it to the council in 1850 where it was used as an assembly room and during the First World War it was converted into a hospital for Indian soldiers who, it was believed, would feel more at home in its surroundings.
An extensive programme to restore the rooms to their original state began in the 1950s to house some of the Regent’s collectables and furniture that have been loaned by the Royal Family for permanent display in the Pavilion.
Visitors who walk through the Pavilion’s gardens that have been restored to Nash’s original vision should also spare some time to visit the nearby Museum and Art Gallery that was originally the Pavilion’s stables.
The Brighton Pavilion is at 4/5 Pavilion Buildings, Brighton BN1 1EE. It’s some 15 minutes’ walk from the railway station and five minutes from the conference centre. Open all year round, admission is £13.50 with the usual concessions for unwaged and senior citizens.
Posted by london communists at 3:07 AM