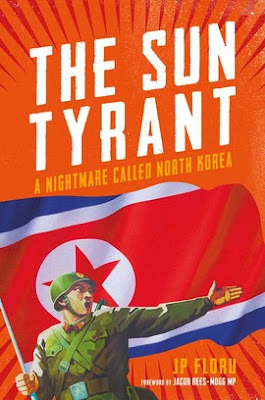 When I first came across the title of this particular volume I thought that it was a biography of the French King Louis XIV – but alas no. Instead, The Sun Tyrant purported to be a travelogue of the Democratic People’s Republic of Korea (DPRK). The book centres around the travels of JP Floru to the DPRK, who tagged along with three friends taking part in the Mangyongdae Prize International Marathon.
From the beginning to the end, the book is full of ceaseless anti-DPRK propaganda. The author repeats, ad nauseam, all the usual cliches about the DPRK from the bourgeois media, without having anything remotely positive to say about People’s Korea. JP Floru's travelogue also suffers from a lot of factual errors. For instance, he calls the main river running through the city of Pyongyang the Pudong, whereas it is actually named the Taedong River. The author is very disparaging about his tour guides and takes a very patronising view of the Korean people generally.
Jean-Paul Floru is a Belgian who came to Britain in 1994. The self-styled “libertarian” says he came here because Britain was a “land of opportunity”. He is a Conservative London councillor and wannabe MP, associated with all sorts of Tory extremists, who has been accused by Labour rivals of links with Belgian racist movements in Flanders. His heroes are Ronald Reagan and Mrs Thatcher, and he naturally associates himself with the likes of Boris Johnson and Jacob Rees-Mogg.
Jacob Rees-Mogg, a possible contender for the leadership of the Conservative Party, has written the introduction to Floru's book on his DPRK visit, where he duly denounces the DPRK's social and political system as being the evillest in the world. This is the same Rees-Mogg who said that foodbanks in Britain are rather uplifting. Rees-Mogg believes that poverty acts as an incentive for the poor to work on zero-hour contracts and without any employment rights. The sentiments expressed against the DPRK by Floru and Rees-Mogg demonstrate their class hatred of Korean style socialism. What the representatives of the bourgeoisie such as Rees-Mogg and Floru despise so much about the DPRK is the fact that it is a state run for and by the working people of that north-east Asian country.
The best thing to do with this publication is to deposit it into the recycle bin and make better use of the paper from which it is manufactured!
Posted by london communists at 7:26 AM