St Peter’s on the Wall 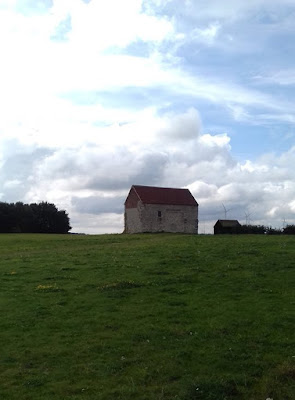 This chapel, built on the ruins of an old Roman fort in the 600s, is a place for contemplation. Though only a mile away from civilisation, this spot on the Essex coast takes you back to a bygone age when Essex was still a kingdom in its own right and Christianity was battling against the pagan beliefs of the old gods of the Anglo-Saxons.
St Peter’s was founded by Cedd, a monk trained at Lindisfarne in Northumbria, who had been invited to spread the word by the newly converted King of Essex. In 654 Sigeberht the Good gave Cedd land inside the ruins of the old Roman fort to build the first monastery in the East Saxon Kingdom.
The 1km footpath from the car-park in Bradwell-on-Sea is, in fact, the old Roman road to the Roman fort of Othona. But little is left apart from a small section of the wall hidden in the undergrowth because most of it was swept away in a disastrous storm and tidal wave in 1099.
The monastery, built entirely from the stones and bricks taken from the Roman ruins, declined as the population drifted after the storm to what is now Bradwell village. The monastery continued as a chapel-of-ease during Catholic times for peasants working along the bleak coastline far from the parish church in the centre of the village.
St Peter’s was dissolved when Henry VIII broke with the Catholic church in the 16th century.  It then sank into obscurity, being used as a barn until it was restored and reconsecrated as an Anglican chapel in 1920.
What’s left is just the nave of a more substantial church. The foundations of the long-lost apse, tower and two small porches are marked out in concrete, and there’s an image on the notice board inside of what it might have looked like in its heyday.
Don't hesitate to visit the nearby Anglican retreat that uses the chapel as its spiritual centre and if you have time take the coastal footpath to Bradwell village, which will take you around the site of the air-base used by night-fighters in the Second World War. Nearby a memorial with a replica Mosquito aircraft is dedicated to the Bradwell Bay-based airmen who fell during the war. More RAF memorabilia can be found at the Bradwell Bay Military & Science Museum in Eastlands Meadows Country Park, which is only open on weekends.
In the village you can pass by Bradwell Lodge, an 18th century mansion built on the foundations of a much earlier Tudor house. There Erskine Childers, the Irish Republican writer who was shot by the Free Staters in 1922 during the Irish Civil War, wrote the novel The Riddle of the Sands, which was published in 1903.
The lodge was later owned by Tom Driberg, the left-leaning Labour MP who pioneered the modern gossip column as “William Hickey” of the Daily Express; became a friend of Guy Burgess, the leader of the Soviet ‘Cambridge Spies’ that included Donald Maclean and Kim Philby, and allegedly peddled tittle-tattle to Soviet and British intelligence throughout the Cold War!
Bradwell-on-Sea is on the Dengie peninsula in Essex. It is best approached by car because the nearest train station is 10 miles away at Southminster. There is a regular bus service from Southminster and a more sporadic service from Maldon.

Posted by london communists at 3:10 AM