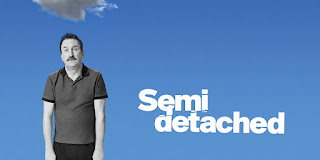 A review by Ben Soton

Many British people live in semi-detached homes, or in the place referred to as suburbia, away from the inner-cities or sink estates but still not the countryside. Pete Seeger mocked this way of life with his folk rendition of Little Boxes in 1963. Manfred Mann did the same a few years later with his Semi Detached Suburban Mr James. Because suburbia covers such a wide and all-encompassing area it is so-easily ridiculed; but by ridiculing so much it becomes inoffensive.
The semi-detached lifestyle is a step up for many who grew up on council estates or the inner-city, whilst a source of snobbery for the more well-healed. A suburban area of any town or city in Britain will contain those to whom it is a step up and some to whom it is a step down, as well as those who have always lived there. It is a great meeting place and for this reason a great theme for comedy.
Suburbia is the theme of Semi-Detached, the latest BBC2 sitcom. The main character Stuart, played by Lee Mack, is a dysfunctional 50-something with chronic IBS who for lives with his younger partner in the same street as his politician ex-wife and her partner Ted. For Stuart, a DJ, this lifestyle is an upward move; whilst for his nemesis Ted, played by Patrick Baladi, it is a step down. The street is shared by the sexually liberated Barry and his partner, who are happy to share their sexual exploits with everyone, whether they are interested or not. Thrown in for good measure are Stuart’s brother, on the run from money-lenders, and his aging father who has recently come out as gay. This combination of insecurity, snobbery, envy and free-love leads to a chaotic environment.
From the Adventures of a Taxi Driver and its sequels of the 1970s, the not-so-funny Terry & June of the 1980s to the Keeping Up Appearances series of the 1990s, suburbia has always been a source of amusement. Semi-Detached however, shows a different place. The earlier series showed an ordered setting, often upset by intruders. In the case of the Adventures films it was the working-class taxi-driver or plumber; whilst with Keeping Up Appearances it was Hyacinth’s less well-heeled relatives.
In the past viewers were always asking the question, are these people as repressed as they are made out?
Semi-Detached, however, shows suburbia in a state of complete chaos. Stuart’s father regularly brings in men he met on Grinder. His brother attempts to smuggle himself into France on a cross-channel ferry. Meanwhile Stuart puts up with continual abuse from the distinctly unpleasant Ted but gets his own back by being sick over him.
I could be tempted to say that the series shows how suburbia has changed, but perhaps it was a place always full of insecurities and secrets.
Think of the so-called swingers’ parties of the 1970s. What has changed is that today we no longer hide them behind net curtains. Either way, suburbia and the semi-detached lifestyle will be a source of amusement for a long time to come.

Posted by london communists at 1:56 PM