A not so gripping tale 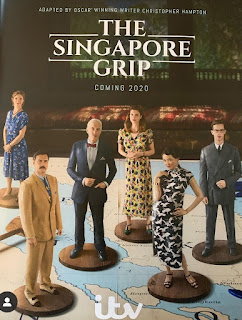 As every TV reviewer now tells us, the ‘Singapore grip’ is a slang term used to describe the sexual act in which a man remains stationary during intercourse whilst a woman clenches her vaginal muscles to pleasure the penis. In all likelihood the man would be of wealthy European decent whilst the woman would be a native of East-Asian origin.
The Singapore Grip is also ITV1’s latest Sunday Night drama, which takes us back to 1942, just before the Japanese invasion of Singapore, based on the 1978 Booker Prize-winning satirical novel by J G Farrell. The drama centres on the colonial elite who controlled Singapore’s rubber industry.
In episode one Mr Webb (played by Charles Dance), a somewhat liberal rubber plantation owner, dies. His fortune goes to his son Matthew (played by Luke Treadaway), whom some suspect may be to the left of his father. The plantation manager, Walter Blackett (played by David Morrissey), has ambitions of his own when he encourages his daughter to marry Matthew.
This, along with the impending Japanese invasion and Mathew taking an interest in the conditions of native workers, sets the scene for the series.
The idea behind satire is that it makes fun of the truth and the drama does so in ridiculing the last days of the formal British empire in the far east.
The British authorities in Singapore certainly had their priorities right. At a time when Britain was allied to the Soviet Union and the Japanese Empire was poised to march through Malaya, they were still trying to deport communists back to Japanese-controlled China.
The suspected communist is Vera Chiang (played by Elizabeth Tan), who is saved from deportation by Mr Webb. Interestingly, the colonial official who wants Ms Chiang deported believes that she is more likely to have communist sympathies because she has a high level of education. This is not to say that communists are more intelligent than reactionaries but it also exposes the fear-based mind-set of late colonial officialdom.
We also see army officers unable to make decisions, which is seen as an important quality in wartime. Meanwhile an Air vice-marshal believes that Japanese militarism can be explained by that country’s high consumption of fish.
The series uses panoramic camera angles, or more than likely CGI, to show the daily bustle of the city state. This includes British soldiers patrolling Singapore’s poorer areas and shots of the island’s wildlife.
With a second lockdown increasingly likely, television studios will inevitably close. My advice is to enjoy as much television drama whilst you can.

Posted by london communists at 4:35 AM