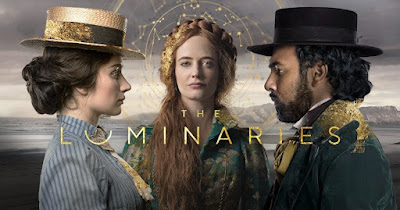 The BBC’s most recent historical drama The Luminaries is based on Eleanor Catton’s Man Booker Prize-winning novel of the same name. Set during the New Zealand Gold Rush of the 1860s, it combines mysticism, suspense and romance.
The main character Anna Wetherill (played by Eve Hewson) arrives in New Zealand to make a new life for herself.  She finds herself cheated and forced into prostitution and opium addiction by Lydia Wells (played by Eva Green), a brothel madam with a side-line in fortune telling.
I was expecting a poorly lit, barely audible drama, rather like the adaptation of Daphne Du Maurier’s Jamaica Inn a few years ago. Instead I was pleasantly surprised; a multi-layered plot is emerging based around the lives of the settlers with some reference to the native Maori population. Like any historical drama, it raises several questions.
It raises the question of different models used by British imperialism in the 19th century. The Indian model was used in places of high population with high levels of economic development; local elites needed to be co-opted as well as forced into accepting Imperial domination. Both India and later Egypt had established textile industries, which were later destroyed in order to protect British industry. This resulted in a native population ruled over by a British administration with varying degrees of collaboration by the local elite.
The alternative was the Australian model applied to areas of low economic development, consisting of hunter gatherer or primitive agricultural societies. This model resulted in the settlement of large numbers of British or Irish migrants, and the displacement of or even genocide against the local population. This resulted in Anglophile colonies such as Australia, Canada and New Zealand that were largely loyal to the Mother Country and were the first parts of the British Empire to achieve self-government.
New Zealand contained elements of both. The Treaty of Waitangi (1840) was signed between Maori Chiefs and the British Government, and today elements of Maori culture have been integrated into New Zealand society. A famous example is the country’s All Blacks national rugby team chanting the Haka, a Maori war dance. But out of a population of around five million, over 70 per cent is of British and other European descent and the Maoris remain second-class citizens.
The drama also exposes the myth of the Gold Rush. Successful prospecting requires economies of scale and large quantities of equipment and capital, making success for the individual prospector unlikely. As Anna is told in Episode One, few made money from individual prospecting, the most successful are those who provide services for the prospectors such as the selling of mining equipment, opening guest houses and the provision of food, drink and entertainment, including prostitution.
The Luminaries goes some of the way to exposing the human misery that entwined 19th century capitalism – in particular, the role of the sex trade and the treatment of women.  The racial angle concentrates on the position of Chinese labour, which shows the link between opium trade and British imperialism. We see this as Anna’s life goes from bad to worse, whilst hoping to be rescued from her sorry state.
Posted by london communists at 2:51 PM